The Bed Asked For It

Dorothy has always behaved beautifully in her crate.  She is in the crate from 8:45-12:00, and then again from 12:45-5:15, and it has almost never been a problem.  She goes into the crate willingly, knowing that I will give her a treat when she does so.  As far as I know, she has never barked or cried while in her crate.  In fact, as I have written about in this blog before, it is sometimes hard for me to get her out of the crate at lunchtime.

Starting a few weeks ago, however, Dorothy began attacking the bed that I put in her crate on top of the crate pad.  Spaced apart by about two weeks, there were two incidents where she tore the cover off the bed, turned the bed over, and then began snacking on the foam rubber that makes up the bed.  Finally this past week she began to do so every day.  I'd come home and be greeted by this sight: 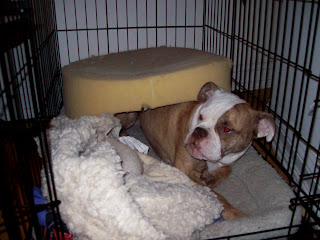 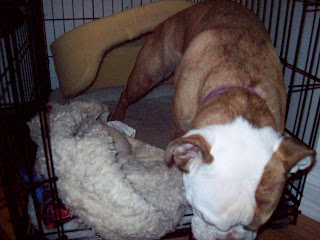 So on Thursday I didn't bother putting that bed back in the crate.  Which means that she had just the crate pad plus the quilt her Aunt Elsie had made for her.  Now when I come home she has the pad and the quilt scratched up and arranged in strange lumps upon which she then perches herself.

I don't know why she is doing this, whether she is getting tired of the crate or just realized one day that it was fun to take her bed apart.  I think she is almost at the point where she might not have to be crated, and I've been experimenting for the past few months with leaving her free-range when I go on errands or to exercise for an hour.  I don't completely trust her yet though--she will still chew things she shouldn't, and she can also be a bit too rough with Posy.  She'll stand over Posy and look down on her half-playfully, half a bit threateningly.  For the record, Posy isn't fazed by it, but it still makes me inclined to not leave her out on her own yet.

One family member was very happy that the bed is no longer put in Dorothy's crate.  Plum is now quite pleased to be able to get in that bed whenever he is so inclined:


Plum thinking:  It's quite comfy, and the dog smell disguises my scent. 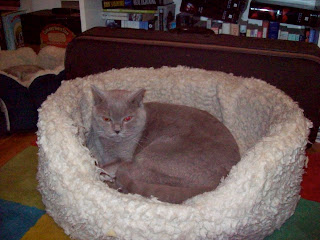 Posted by Elizabeth at 8:11 PM