I was looking at my blog stats the other day and saw that someone had reached this blog by searching for "the prettiest pitbull in the world."  I giggled.  I hoped they were pleased with what they found.  Dorothy is certainly the prettiest something in the world, but that something is not a pitbull.

The other day I was buying pastries in the bakery, and Sean was standing outside with Dorothy.  A woman came walking by and tried to scoot around Dorothy (who wasn't paying her any attention, intent, as she was, on making sure I remembered to buy her a bread bone in the store).  She said in a panicked voice:  "I'm scared of pitbulls, can you move your dog?"  And Sean replied, "Well then this is your lucky day, because she's not a pitbull," as he moved her aside.

I thought it might be time for a wee tutorial.


This is Dorothy, an Olde English Bulldogge: 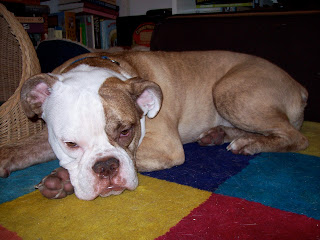 This is a pitbull: 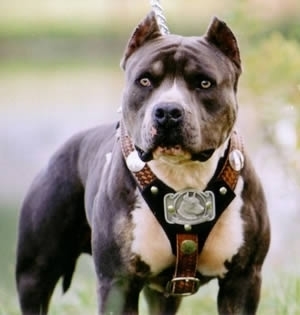 I'm sure this pitbull is a very fine fellow, and he is most certainly handsome.  But I don't quite see the resemblance between him and Dorothy myself.
And it seems a bit silly to be scared of passing one certain breed on the street (especially if you can't identify that breed correctly).  I'm always reminded of a study I read in which the author kept a record of the people who went to emergency rooms after getting bitten by dogs--and by a large margin, the kind of dogs that were doing the biting were cocker spaniels!  (No offense to that breed either--Dorothy has a cocker spaniel friend, Potter, and she likes him muchly!).
Be scared of the dogs that are growling and showing their teeth and acting menacing, and trust that you can walk safely past all the rest, no matter what their breed may be.
Dorothy, thinking "I'll bite your bloody kneecaps off." 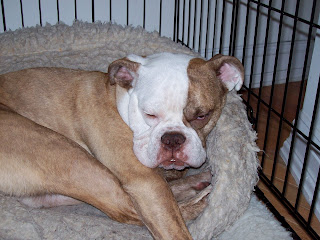 Posted by Elizabeth at 6:02 PM

ha! I wonder how anyone can be scared of a dog who is lying on her back being dragged down the street!

So true! She might drama-queen someone to death, but that's about it!

That's why I dress Roxy in pink exclusively: I think it softens her pittiness. Can you really be frightened of a wiggly dog in a pink poncho?