It's Plum's Turn To Be Festive!

My British Shorthair, Plum, is a cat with dignity.  He's the kind of guy who would choose to wear a pinstriped waistcoat, even on Saturdays and even in the a.m., and perhaps with a bowler hat.  (I admit to trying on several occasions to get my mother to sew him such a weskit, but she, wisely, will have nothing to do with that project, for she knows--that way crazy lies.)

Anyway, prior to tonight's endeavor, I figured Plum would be my pet who would least tolerate wearing Christmas cheer.  But surprisingly, I was wrong about that.  He actually stayed quite still while he was being "dressed," and only gave me cranky ears with perhaps a bit of recrimination around the eyes.  But no wriggling!

Here is the fine gentleman in his Santa Claus necktie.  Behold! 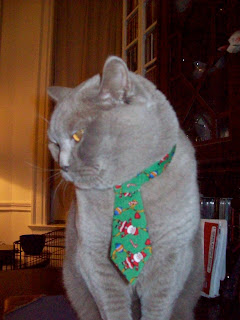 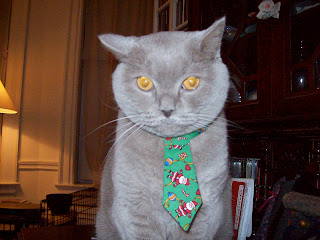 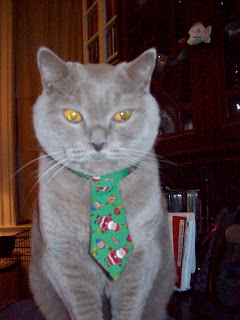 I also made him try on Posy's santa hat, although I wasn't able to get a very clear picture: 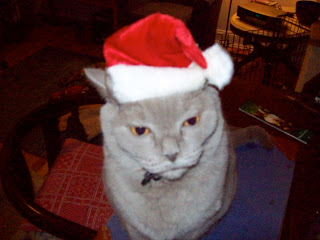 What a cooperative Sir Plum!
Posted by Elizabeth at 7:08 PM

This is not surprising, considering that He Do Not Do What You Do Not Like.

He is very handsome, that Plump Dumbledore!