I have never had a tree in my apartment here, and do not really have any plans to ever do so.  First, it's a small apartment; second, I have two cats who would climb a tree and a bulldogge who would chase them up it; and third, every year my landlord puts up a tree right outside my door: 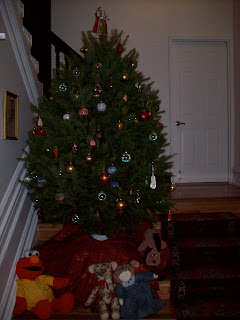 As you can imagine, Dorothy was very interested in the tree that magically appeared right outside of her front door.  Surprisingly enough, however, she's been interested in a very non-destructive way.  She sniffs the tree as she passes, and if allowed, she would attack the animals and dolls underneath it, but so far she has obeyed my command to "leave it!" whenever she veered too close. 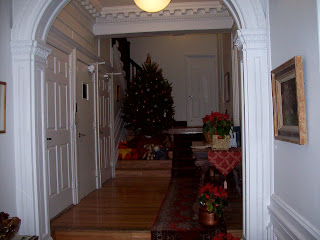 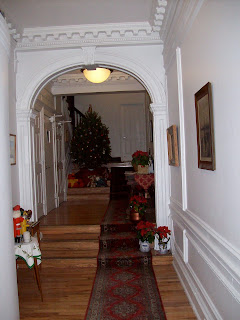 I had less luck with the cats disinterest while wrapping gifts.  They were very much not disinterested, to use a double negative.  They wanted to help with each gift and each rolling out of the wrapping paper.  I didn't even use ribbon this year, but that did not help stanch their interest.

And as the presents slowly came out of the bags and were wrapped and placed elsewhere, the cats went into the bags: 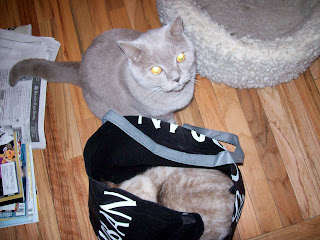 During all this, Dorothy was moping in the bedroom and occasionally whining about how No One Ever Plays With Her and oh! Life Is So Hard.  This was fortuitous, since I was able to wrap Dorothy's gift without her seeing it.

Dorothy is not yet aware of the fun in store for her--a trip in the car, cousins, plates of cookies, wrapping paper, uncles, aunts, grannies and grandfathers, new trails to walk on!  She is in for a lot of merriment, and a whole lot of cheer.  And permit me to mention again:  holiday cookies!
Posted by Elizabeth at 4:26 PM

When Abby gets wound up (about 12 times per hour), she launches herself right into the Christmas tree. So far, it's proving to be very sturdy. I am planning to wrap presents and keep them in garbage bags in a closet and only bring them out on Christmas morning because she and Wilhemina would destroy them. Abby's favorite thing is actually ripping up cardboard or pieces of paper into millions of tiny pieces. When she gets too wound up, we find a cardbox box for her and she goes to town sharpening her teeth and strengthening her jaw. I can't even imagine what she would do with a stack of presents. Except be very, very happy.