"Does Dorothy have a prey drive?" you may ask.

Yes, yes she does.  I answered this in the affirmative to myself the other day as Dorothy was flying me like a kite.  She was zooming after a rat she spotted in the park at 9:00 pm and was pulling me with such strength and such speed, that I was sure that I would soon be flying out behind her like a horizontal Mary Poppins.  Turns out Bulldogge is STRONG.

I don't know what was going on in the park that night.  I have seen the occasional rat there before, but always on an evening when it was 95 degrees out even late at night, and I always assumed they were out looking for water and refreshment, something in the slurpee family mayhap.  But this night was a cold one.

"Do rats hibernate?" I mused as Dorothy spotted another rat in a tangle of rose bushes and tried to pull me behind her into the thorny thicket.  For if they do, maybe this was their last hurrah before slumber, a kind of rat rumspringa.

An alternative idea was that perhaps rat poison had recently been distributed throughout the park and these rats were all woozy from hemlock.

At any rate, I realized that Dorothy has perhaps inherited her mother Nancy's penchant for hunting and catching frogs, only being a city bulldogge, her prey of necessity was varmint.

I also realized that night that it was a very good thing I had looped her leash twice around my wrist.


Dorothy being walked by a park denizen in an empty fountain,
sniffing for Templeton: 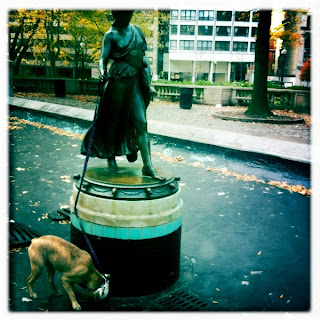 Posted by Elizabeth at 7:28 PM