She's Got The Whole World...

In her hands.  Er, in her paws rather. 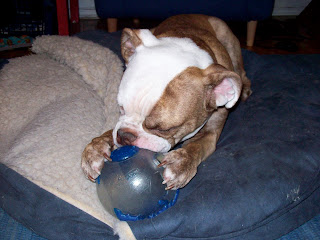 And she is clearly working hard to eat off all the continents.  I thought this ball might be a good "soccer ball" for Dorothy.  They were selling them in all different sizes at the dog shop down the street, and the tag mentioned all sorts of things about "durable" and "sturdy" and made to last, etc. etc.  Of course, after five minutes of chewing she had torn off Ireland and the British Isles, and was going to town on Africa.

Dorothy does seem to have strong jaws, and she has very impressive powers of concentration, but 5 minutes?!  I expected the toy to last a bit longer than that.  Soon she'll have eaten off all the countries and then perhaps the toy can just be used as a regular bouncy-type ball, instead of something that Must Needs Be Destroyed Pronto! Apparently chewing trumps chasing and fetching.

In a few more sessions, however, the phenomenon of global warming will have happened in her spherical world, as it slowly is in ours, and Dorothy's globe ball will be all ocean. 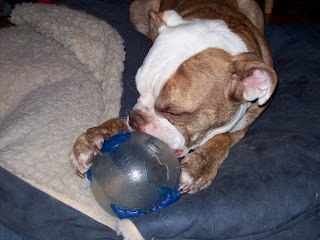 Posted by Elizabeth at 6:25 PM