I would be very happy if I did not have to go to the vet's office for the next few months. Whereas Dorothy loves going to the vet's, I tend to sympathize more with the feelings of my pug, Tulip, who would basically rather have chewed off her own paw then visit a veterinarian.

In the past two weeks, however, Dorothy has had a few incidents which have made me think a vet visit was in my future.  First, she began pinwheeling her ears non-stop, which I know is a sign of an ear infection.  She was always scratching at her ears and shaking her head so that it flip-flopped more than a political opinion of Mitt Romney's.  At the time the pinwheeling was occurring, however, we were having a stretch of oddly warm and rainy weather, and I remember that Tulip would occasionally get yeast infections in her ears when the weather was like this, but they would go away on their own accord when the weather changed.  And it has now been a few days since Dorothy has shaken her head, so she is either all cured, or has gone deaf.  Ha.  I'm betting on the former.

But we are not out of the clear yet, apparently, for at the dog park yesterday, Dorothy all of a sudden began urinating every few minutes--or at least attempting to do so.  She'd get in position, but then only a few drops would come out.  She then asked to go out frequently last night, and squatted down the minute her legs touched sidewalk.

This morning I gave her a little bit of vitamin c in her breakfast, which the vet told me once can help if a UTI is just beginning.  Then I also gave her a teaspoonful of a concoction called "Harmonize Bladder" at breakfast and at dinner.  This is an herbal mixture that is meant to help stabilize the bladder of a dog prone to getting UTIs.  It does seem to work, although while it harmonizes her bladder it will often cause problems with her bowels--a choose your poison kind of situation.

Anyway, I'm keeping my fingers crossed that I don't have to visit the vet's this week, as I don't have the $200 that our vet visits always seem to end up costing.  Wouldn't a glass of cranberry juice be much cheaper?


Dorothy, looking to see what other ailment might be coming her way: 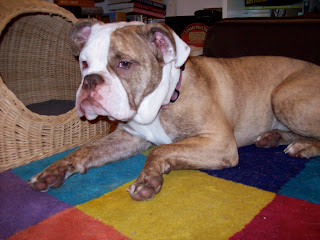 Posted by Elizabeth at 5:27 PM