My cats rotate their sleeping spots.  They each have two or three spots where they can always be found for a few months, and then one day I’ll go to look for them in their spots and they won’t be there.  A spot shift will have occurred and for some reason unbeknownst to me, they will have switched to two or three different locations.  Since cats are melodramatic, I’m guessing that this rotation has something to do with [imaginary] predators and their desire to not be prey.
[Digression:  it is also no doubt for this reason, that when I am holding the blanket open on the couch so Plum can climb under, and he is standing there trying to decide whether or not he really wants to go under the blanket for a good four or five minutes, and then just as I am dropping the blanket in exasperation he decides yes, yes that is where he wants to be, so I hold it open again even though my arm is hurting – it is probably because of predators that before climbing down from the armrest and under the blanket like a raccoon into a stream, he will look left, he will look right, AND THEN HE WILL LOOK UP AT THE CEILING before climbing into his spot.  THE CEILING.  What he thinks might be lurking up there waiting to drop down on him I can only guess, but he likes to cover all his bases.  Weird animals.]
Anyway, in the last day or so my cats have rotated their sleeping spots, so that when I came home at lunch and looked for Posy in her two spots in the bedroom, and Plum in his spots in the living room and study, I found nothing.  Nary a cat to be seen.  I finally discovered Posy lurking in Plum’s carrier which we keep in the hallway: 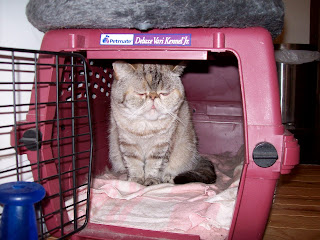 And then I found Plum wedged into what we call the cabana, which is really a Chihuahua bed (but don’t tell Plum that): 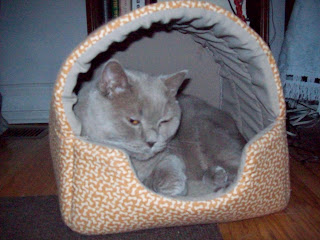 Plum almost always greets me at the door when I come in, but the cabana is so small that he was probably somewhat stuck.
Before I started looking for the cats, I opened Dorothy’s crate door.  After five minutes or so of cat searching and then cat greeting and cat photographing, I returned to Dorothy’s crate and found her unmoved: 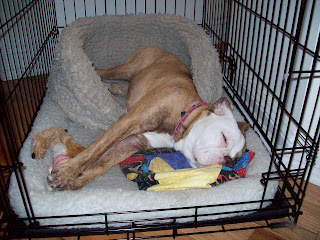 A friend and fan of Dorothy’s who works at the nearby market said to me the other day that he bet Dorothy really greeted me when I came home from work, and that there must be barks and wiggles and whatnot.  And I had to reply that actually no, she gives me no greeting whatsoever.  Let’s review.  Dorothy, again, ten minutes after I have returned home to take her out at lunchtime:

She doesn’t look too excited, does she?  In her defense, she was a bit tired from two play sessions yesterday with Josie Beagle.  In fact, after I finally got her up and out of the crate and took her on a “walk” halfway down the block and back, she decided not to oversee my lunch eating and disappeared.  I found her later in the study crammed in the small cat bed: 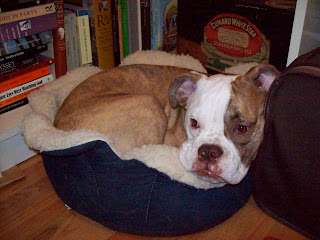 I need to show these crate photos to Roxy because when we come home--even if we've been gone for 10 minutes--she acts like she's been locked in her "little house," as the boys call it, for 15 hours and had nearly lost all hope that her people would return for her. She starts hysterical yipping long before we get to the room to let her out. She then explodes out of the crate, knocking cats over like bowling pins, gouging the hardwood floors with her claws as she makes tight spins all the way to the door to go out, yipping all the while. She needs a lesson from Dorothy!