When Dorothy came to live with me in March, she weighed 12 pounds and was a roly-poly little thing.

Dorothy and her rubber ducky: 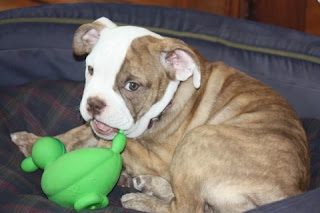 She is now about 32 pounds and rather gangly.  She’s the size of a large beagle, I’d say, and whereas her back half is still skinny and rather ribsy, her front half is getting very muscular.  My guess is that she will be a bit smaller than her 50-pound mother, Nancy, but I could be wrong about that.
Grimm and Nancy, Dorothy's parents (pic by Jess Seiders) 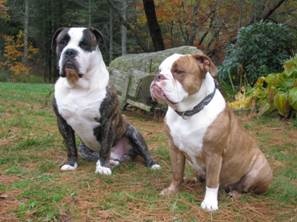 Yesterday in the park we stopped to talk to a man who has an Olde English Bulldogge, Shayna, who is about 1½ years old.  Shayna is a very pretty tri-color dogge, black on top and cream and brown underneath.  Shayna lay down when she saw Dorothy, and Dorothy’s response was to start running mad circles around the circumference of her leash, and leaping gazelle-like over Shayna whenever she got to her side of the circle.
While this was going on, Shayna’s owner then asked if Dorothy was small because she was seven months old, or if she was just a really small bulldogge?  I didn’t know how to answer that!  Shayna was big, but not huge, I’d say in between the sizes of Dorothy’s parents.  In other words, a size that Dorothy could definitely end up being herself one day.  To him, however, Dorothy seemed quite petite.  (He also thought her name was Burpee!  Note to self:  stop mumbling.)
Ironically, we then left the park and ran into a woman who lives down the street who hadn’t seen Dorothy in about a month.  The first thing she said was, “Dorothy!  You’re huge!  You’re the size of a gorilla!”  To this woman there was nothing miniature about my Dorothy!
So I guess the jury is still out as to whether Dorothy will be large or whether she will be small—and I also suppose size is in the eye of the beholder.  I will be happy with a big Dorothy or happy with a small one.
Dorothy eating her kibble so she can grow big and strong: 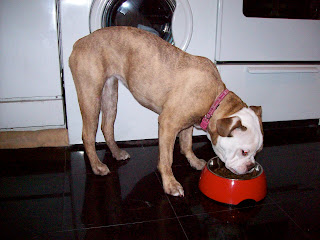 Posted by Elizabeth at 6:40 PM

Look at those long legs!

I know! She is very gangly and skinny. I'm thinking maybe I need to feed her more kibble. On the whole she is still rather small--she doesn't come up to my knees, for example.