Dorothy went to the dog park again yesterday and absolutely loved it.  She eagerly walked the seven or so blocks to the park, and seemed to know exactly where we were going.  It is, sadly, rather rare for her to lead the way in the front with leash outstretched, but she led the way the entire trek, all eager like a normal dog!  (Just now, for example, when I took her around the block for a quick leg-stretch, most of the "walk" consisted of me dragging her behind me like a bag of cement.  The rest of the walk consisted of Dorothy lying down in the midst of smushed ginkgoes, trying to eat a few before I intervened.  It was when I had my hands in her mouth fishing out the ginkgo that a man passing-by noted:  "It is like you are the employee and she is the boss."  Yes.  Thank you for that observation, kind sir.  And hey:  I quit!)

But I digress.  Dorothy speed-walked to the dog park, and once there spent the first 30 minutes adorably playing frisbee with a 10 year-old girl.  The girl's dog, an Italian waterdog, wasn't very interested in the frisbee, so she and Dorothy paired up and had a fine old time.  I was a little wary at first, since Dorothy tends to get a bit too attached to frisbees and doesn't like to give them up to a human.  But as she seems to be in general with kids, Dorothy was very polite with this girl.  The girl threw the frisbee, Dorothy retrieved it and brought it back; the girl took the frisbee from Dorothy's mouth; Dorothy didn't bite her; the girl made Dorothy sit; Dorothy sat; and then she would throw the frisbee again.

Dorothy doesn't quite catch a frisbee in the air yet, but the day when she will do so is not too far off, I think.  For she has a freakish ability to jump straight up in the air out of nowhere, and will even do so on occasion on a walk.  She'll all of a sudden be at my eye level (and I am relatively tall) and then on the way back down will grab the leash near my hand and start a game of tug.  She especially likes to hold her own leash when we are safely back in my building, and is quite proud to walk herself up the hallway.

But after thirty minutes, the frisbee owner left, and Dorothy then ran around vigorously with the other dogs for thirty more minutes.  She even almost kept up with a matched set of two fleet boxers.  She met many a mutt and many a hybrid with "poo" in the title.

Sean and I were smitten by a tiny piglet-colored French Bulldog who sped around the yard as if his legs were sleek and not stumpy, his belly taut and not tubby, and his whole person the size of the heads of most of the other dogs there.  This French monsieur or mademoiselle had character!  S/he also did a fine job of greeting all the humans with wiggles and standing on hind legs to get closer to faces.  Very cute!

Dorothy even walked all the way home, only stopping twice to flop over on her side for a quick rest, and then getting up again without too much wheedling.  She is a very athletic and very social Dorothy!


Dorothy, resting up for her next dog park outing: 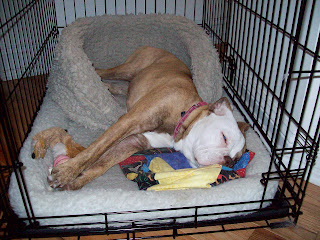 Posted by Elizabeth at 4:34 PM