Last Saturday, Dorothy returned from the dog park wanting to look up something in the Bulldogge By-Laws.  She was quite certain that under either Found Items, or Treasures, or Soccer Balls, or a Just Because clause, there existed an article which said something to the extent of:
Because this clause had not been confirmed at the time, Dorothy was not allowed to leave with her treasure, and after we realized that she would do nothing but pace with the ball in her mouth along the fence by the gate hoping to sneak out and run home, we took the ball away from her and hid it up in a tree.  She did stand guard under the tree for about five minutes, but she eventually gave up and joined in with the canine merriment going on around her.
Apparently, soccer balls are Dorothy’s favorite!  I’m going to have to try to find her one that she can’t puncture.
Everyone has a soccer ball but me. 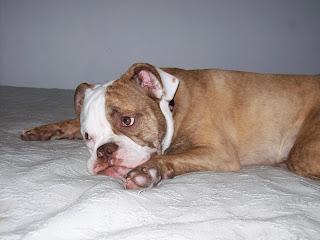 Posted by Elizabeth at 5:59 PM