We had a strange experience with Dorothy at the dog park a few days ago.  We arrived at the park and found about 12 or so other dogs there moseying about.  Dorothy immediately became immersed in a game of Frisbee (in fact, she kept snatching the Frisbee away from a man and his dog and trotting with it over to us all proud of herself), and then a game of tennis ball.  She didn’t really seem in the mood to play with the other dogs, perhaps because it was a little hot.  Anyway, after we had been there awhile I noticed that there was a woman in the park with her two dogs—one an old looking golden retriever with strings of drool hanging from its mouth, and the other a medium-sized white furry dog, perhaps a cockapoo.  Whenever Dorothy got inadvertently near one of her dogs, or vice versa, the woman would jog purposefully across the dog park to them, and stand in between her dogs and Dorothy.  She wasn’t doing this with any other dog, so it soon became obvious that my sweet little Dorothy was once again being mistaken for a pitbull, and a vicious one at that.
I watched with amazement as this happened about six or seven times, until finally the woman got tired of her CONSTANT VIGILANCE! and decided to bring her two dogs into the special fenced-off small dog area.  In other words, she brought her large golden retriever, mind you, in with the dachshunds and yorkies, rather than let them be ravaged by my “pitbull,” Dorothy.  !!!  As I said before, Dorothy wasn’t really in a dog mood, so wasn’t paying any attention to the other dogs, for the most part.  And in general, she is on the submissive side when it comes to other dogs.  If a dog is bothering her, she might let the dog know to back off, but when we are walking and she sees another dog, she almost always will lie down on her stomach and sometimes even roll over on her side or back.  My point, I suppose, is that leaving out the fact that she was misidentified as a certain breed of dog, her actions at the park were only threatening to the tennis ball (and anyone who tried to take the Frisbee away from her.)  It was very strange!
If I had written this entry on Wednesday, I would have ended it with the above paragraph and felt very preachy towards that woman about pitbulls and how it’s not so much a breed of dog that is the problem but the owner.  And I still feel that way.  However, when I was walking Dorothy in my neighborhood yesterday, a woman in her twenties was walking a pitbull who was the same coloring as Dorothy, and very pretty in her pink collar.  The woman said her dog was friendly and asked if she could say hello to Dorothy.  I said yes, since Dorothy was very eager to meet this dog.  They sniffed for about two seconds before the dog started VICIOUSLY snapping at Dorothy and making horrible growling/arrghing sounds.  I barely was able to pull Dorothy away from the jaws of the other dog in time.  And the annoying thing is that the owner of the dog didn’t even seem aware that anything was wrong!  She didn’t apologize, or say something to the extent of “That’s strange, she usually likes other dogs.”  Nothing.  Nada.  She just went on her merry way.  My guess is that she is new to dogs and had no idea that the sound her dog was making – plus its serious snapping and biting – was not a normal happy greeting between two dog-friendly dogs!
And I must admit that as I walked away my first reaction was to be like that woman in the dog park, and in the future resolve to keep Dorothy away from pitbulls on the street.  But I know that isn’t right.  In the dog shelters in Philly, the majority of the dogs available for adoption are pitbulls or pitbull mixes.  Some places screen better than others, but if you see a young person on the street with a pitbull, there is no way of knowing if they are an experienced dog owner, or even how well they know their dog.  But to be logical, the same is true for owners of any dog, not just pit mixes.  The guy I see with the german shepherd daily might know nothing about controlling his dog either.  And on occasion we pass a fawn-colored chihuahua who acts like he wants to go for Dorothy's jugular.  So I need to remind myself that an ill-behaved or dog-hostile dog isn’t breed-specific. 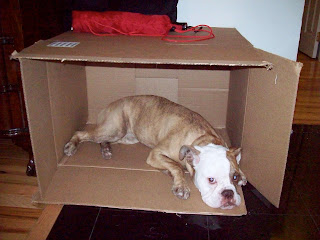 Later on in the evening after we had had the experience with the woman in the dog park, we were in the neighborhood park and met a man with a beautiful pitbull mix (named Dottie!).  She and Dorothy sniffed calmly enough, but the pitbull Dottie was very still, in a way that made me a little wary (she also had the clipped ears, which could be a sign that she was once used for fighting).  The friendly owner told us that he had just adopted Dottie a week ago and was still getting to know her.  We moved on and all was well.  Then Dorothy was happily wrestling with her favorite friend, Josie Beagle, when Sasha, a tiny brindle "pug" with Frenchie in it came up to join in.  Josie and Sasha started to run (we were holding on to Dorothy’s leash still so she couldn't really join in) when tiny Sasha snapped and started attacking Josie and both dogs had to be separated by their owners.  I know Sasha somewhat and Dorothy has played with her before and she’s always been a great little dog, but something set her off this time and she got angry.  Am I going to now condemn all pug/Frenchie mixes?  Of course not….  There just has to be a balance between monitoring Dorothy's dog interactions and letting her fight her own battles, so to speak.
And then last night Dorothy did get attacked – slapped on the nose by an angry purple cat!
She was asking for it, dressing that way. 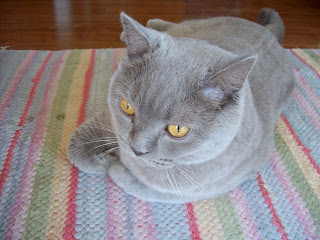 Posted by Elizabeth at 6:25 PM

Makes me think of that Peter Sellers skit where he asks "does your dog bite?", a man replies "no" (all in very silly accents, mind you), the dog then bites, Sellers says "i thought you said your dog does not bite!" and the man says "that is not my dog". Heh heh.
http://www.youtube.com/watch?v=Ft-d0QQutnk

Did i finally make a post?!?! in case you're wondering, Ms.E, this here is Ms. Krissy-woo from beantown! XOXO

Yay, Kris(tin)! I'm glad the posting finally worked. My sister was talking to a blogger techie and he recommended that she change a setting, so I did the same. And voila! No bugs in the comments anymore. At least for now.

I could have answered like Peter Sellers when those girls asked me if my dog bites, since at the time I had Tulip, who didn't!....

Interesting post. We definitely get a lot of people pulling their dogs (or kids!) away from Roxy's vicinity. In the case of dogs, I'm ok with that. She is no longer allowed to meet and greet other dogs because she does many of the behaviors you describe in the pittie who supposedly is good with other dogs. It's just been in the last couple of years that she has become somewhat dog aggressive. Our problem is the people who refuse to keep their dogs on a leash and then assure you as their dog is racing towards yours, "My dog is friendly!" WELL MINE ISN'T!