It Must Be The Trail Mix

For the record, I am no closer to understanding what is going on in Dorothy's little pea-brain when she refuses to walk, especially since while on vacation in Maine, she walked like a dream daily.  Go figure.  I don't know if it was that there were three of us walking, or if it was that another dog was in the group, or if it was just the quiet of the Maine roads and forest trails.  But for some reason, Dorothy set off at a fast clip each time and did not even stop to sniff once.

On her first walk in Maine, she walked 2.5 miles: 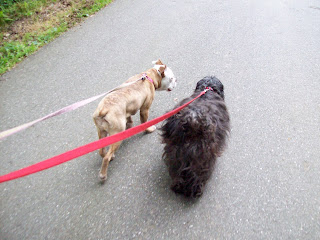 She didn't stop or slow down, but when we got back in the car at the end of the walk, I noticed with horror that she had bleeding blisters on three of her four paws!!  We felt horrible about this, although Dorothy didn't pay any attention to the wounds whatsoever.  She also hadn't limped or shown any sign of distress while we were walking, so the blisters were a surprise.  We decided after that to give her a couple of days off and then to walk on dirt roads that would be a little softer on her feet.  Since all her walking in Philadelphia is done on pavement, I would have thought that her little paw pads would be calloused enough for a 2.5 mile walk.  After all, she doesn't seem to like walking in Philly, but she still goes on 5 or 6 walks per day.

At any rate, we did a few dirt road walks, and then one walk on a forest trail which Dorothy loved!  I want to take her on more woodsy hikes, since she zoomed up and down the trails at a fast and sure-footed pace, stopping every now and then to pick up a pinecone and carry it like a cigar clenched between her teeth.


Dorothy, resting after one of her Maine excursions: 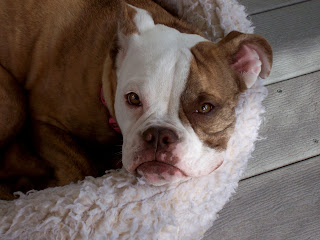 I had optimistically hoped that once we returned home Dorothy would continue with the good walking she did in Maine, but this has not really been the case.  She's perhaps a little better than she was, but she still has moments where she performs a little strike on the sidewalk, gathering the sympathetic attention of the passers-by.  I was wondering if perhaps the over-stimulation of the city streets could be the culprit, but I have a feeling that Dorothy just wants what she wants -- and sometimes what she wants is to sit.
Posted by Elizabeth at 6:19 PM

Perhaps it's nellie. Dorothy just wants to see what the Yedi will do next.