Dorothy at the Dog Park

We had a cool weekend, finally, and since Dorothy couldn’t use the heat as an excuse to collapse on the sidewalk, we decided to walk her the five blocks down to the dog park for some fun and frolic.  She walked all the way without complaint, and even got a few compliments on her new Red Sox leash!
Once we got inside the park, we took off her leash and she went running away to meet the other dogs.  Every few minutes or so she’d come back to where we were standing to check in, but she seemed to know the purpose of our visit and immediately began running and playing and doing her moves.
Here she is with Lupe, a dog rescued from the streets of Mexico, and Hendrix, a dog with fine ears. 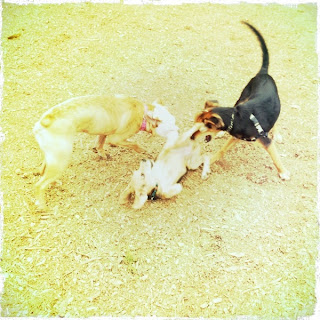 And here are a few other action shots. 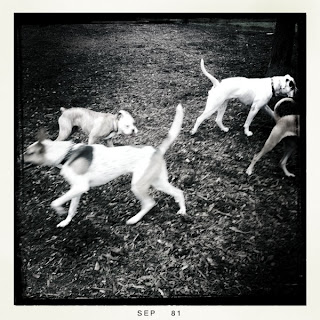 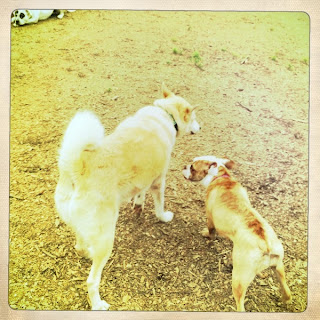 It’s interesting to see what the dogs choose to do with their time in the dogpark.  One boxer spent his time racing around the perimeter—and he was FAST.  Sometimes other dogs ran with him, and sometimes he ran alone.  One large pitbull mix would go bark at the other dogs when they wrestled, so we called her The Ref.  She was black and white, too, so seemed made for her job.  Some of the dogs played ball, and some were more interested in standing around getting scritches from the humans.
I’d say Dorothy ran for at least 45 minutes, if not longer.  I didn’t think she would make it back home on her own accord, but she waited to the next to last block before lying down for a quick rest.
A few days later she went back to the dogpark with Sean, and once again had a good time.  Apparently this time she was a little more aggressive, and more sure of herself amongst the other dogs.  Here she is playing with what looks like a stuffed black rag, but I've been assured is a dog.  By all accounts, it was biting Dorothy's cute hind legs, and she had finally had enough of that: 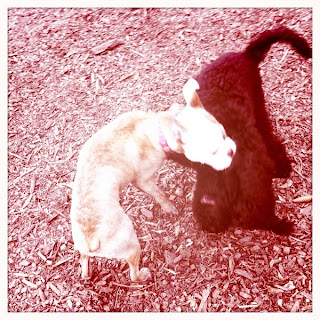 Unfortunately, the heat has returned to Philadelphia, and when it is over 80 and muggy, Dorothy is not inclined to go on a long walk.  But I'm hoping to return to the dog park this weekend for Dorothy to continue her dog socialization and perfect her athletic moves.  Go Dorothy!
Posted by Elizabeth at 5:41 PM