We Do Not Hit

We do not hit and we do not kick are both phrases that are said over and over in Bulldogge Manor these days.  Owen has started doing both whenever he gets angry—which, since he is in the “terrible twos” phase, is quite often.  I find it all very curious, because Sean and I obviously do not go around hitting and kicking each other when we get angry, so it is not behavior that Owen is mirroring.  It must just be innate, to want to lash out physically at the person frustrating you? 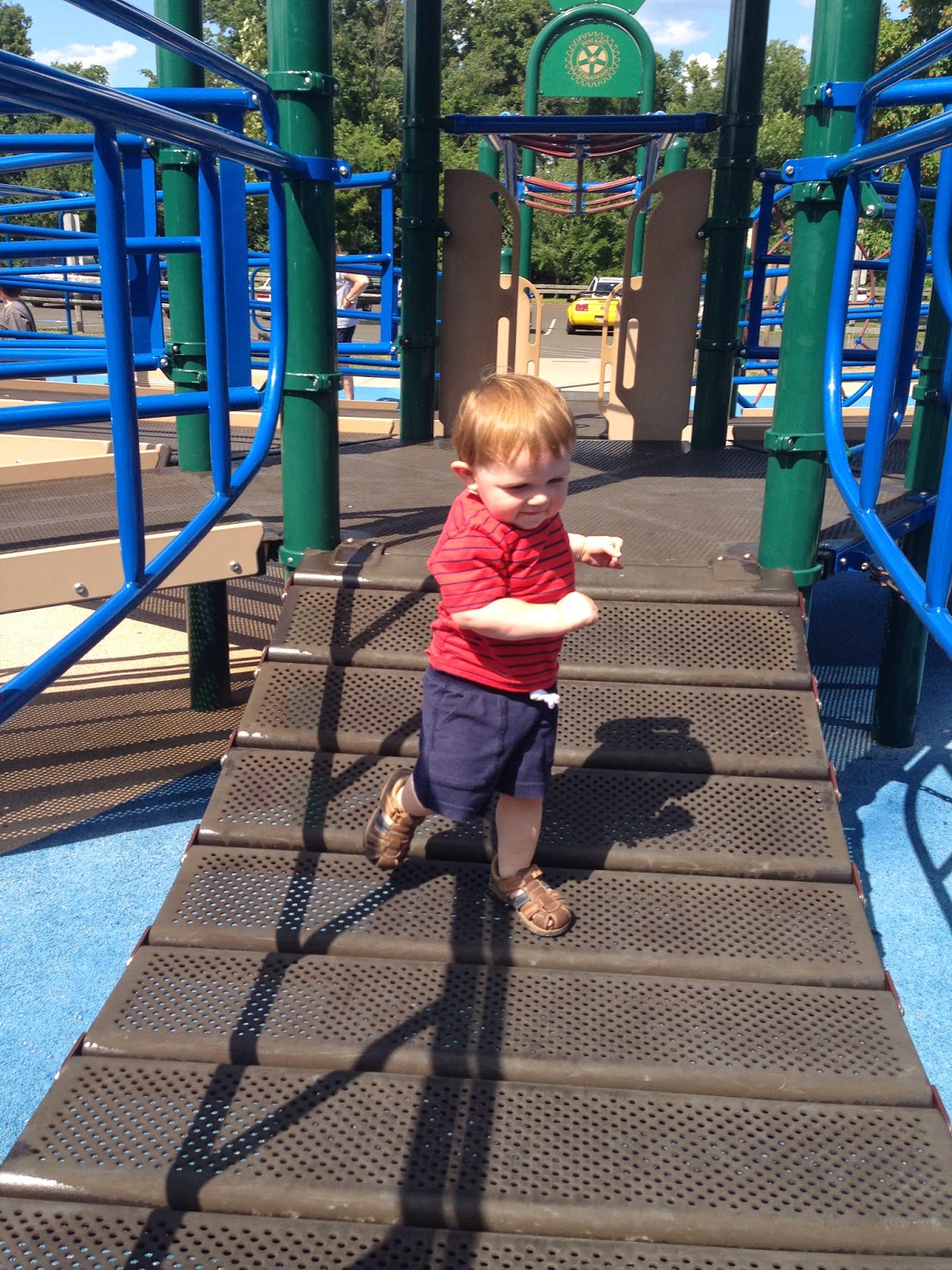 It is to Owen these days at any rate.  Susan got him two books, Hands are not for Hitting, and Feet are not for Kicking, which we read to him (although I sort of think it hadn’t really occurred to him to kick until we started reading him this book, oops).  And he knows now that hitting and kicking are things he isn’t supposed to do, although most of the time he just can’t help himself. 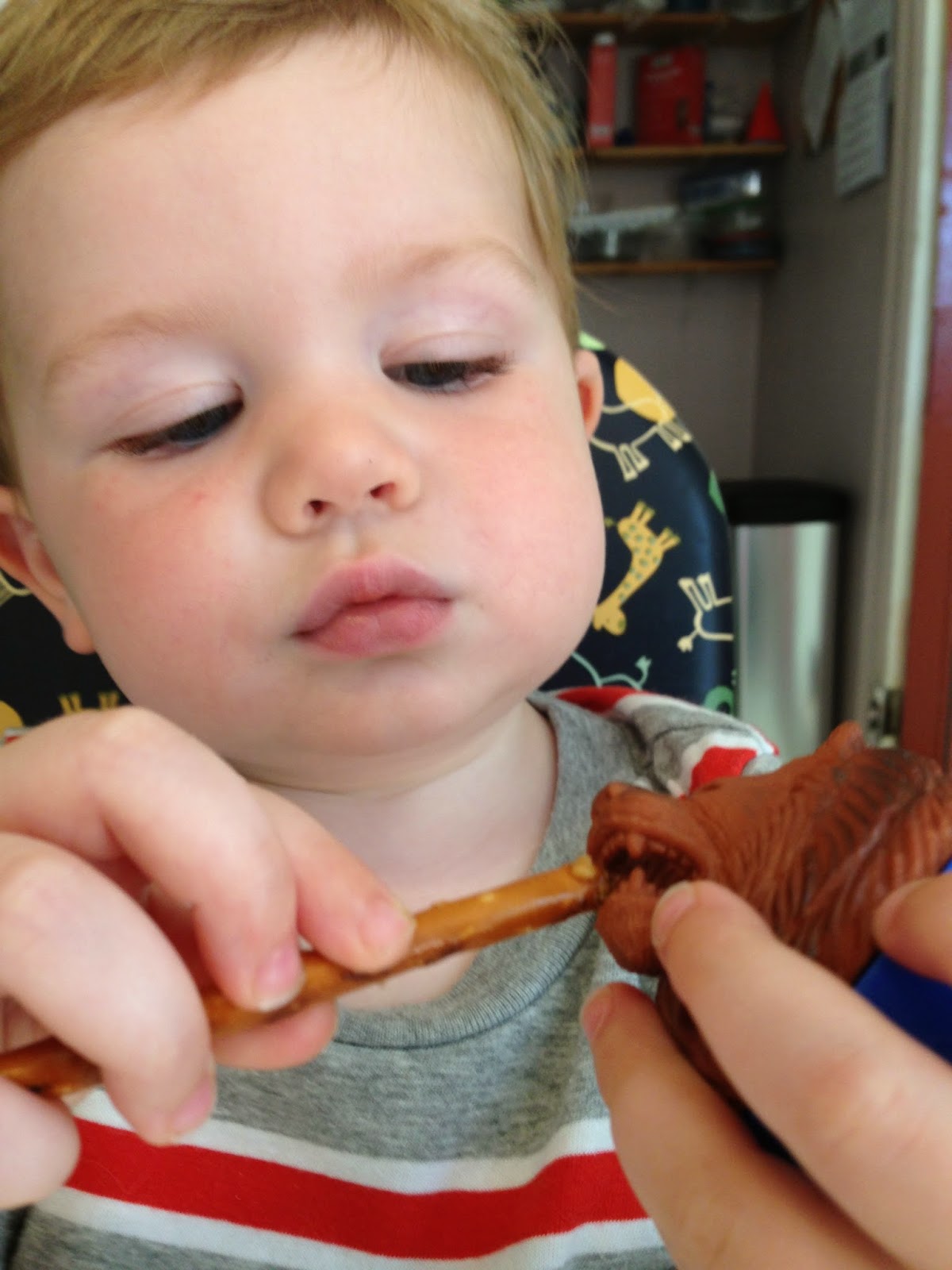 I’m trying to respond consistently, although sometimes I will ignore him when he hits, because it often seems like he stops if he doesn’t get an angry reaction from me.  He is especially naughty on the changing table, when he will kick out constantly while we are trying to change his diaper.  What works best is to distract him by singing or asking him a question while simultaneously getting his little ankles in a pincer grasp and changing the diaper as quickly as possible.  I also like to tell him that whereas hands are not for hitting and feet are not for kicking, noses are for honking!  And then I quickly honk his nose, which sometimes will get him to giggle. 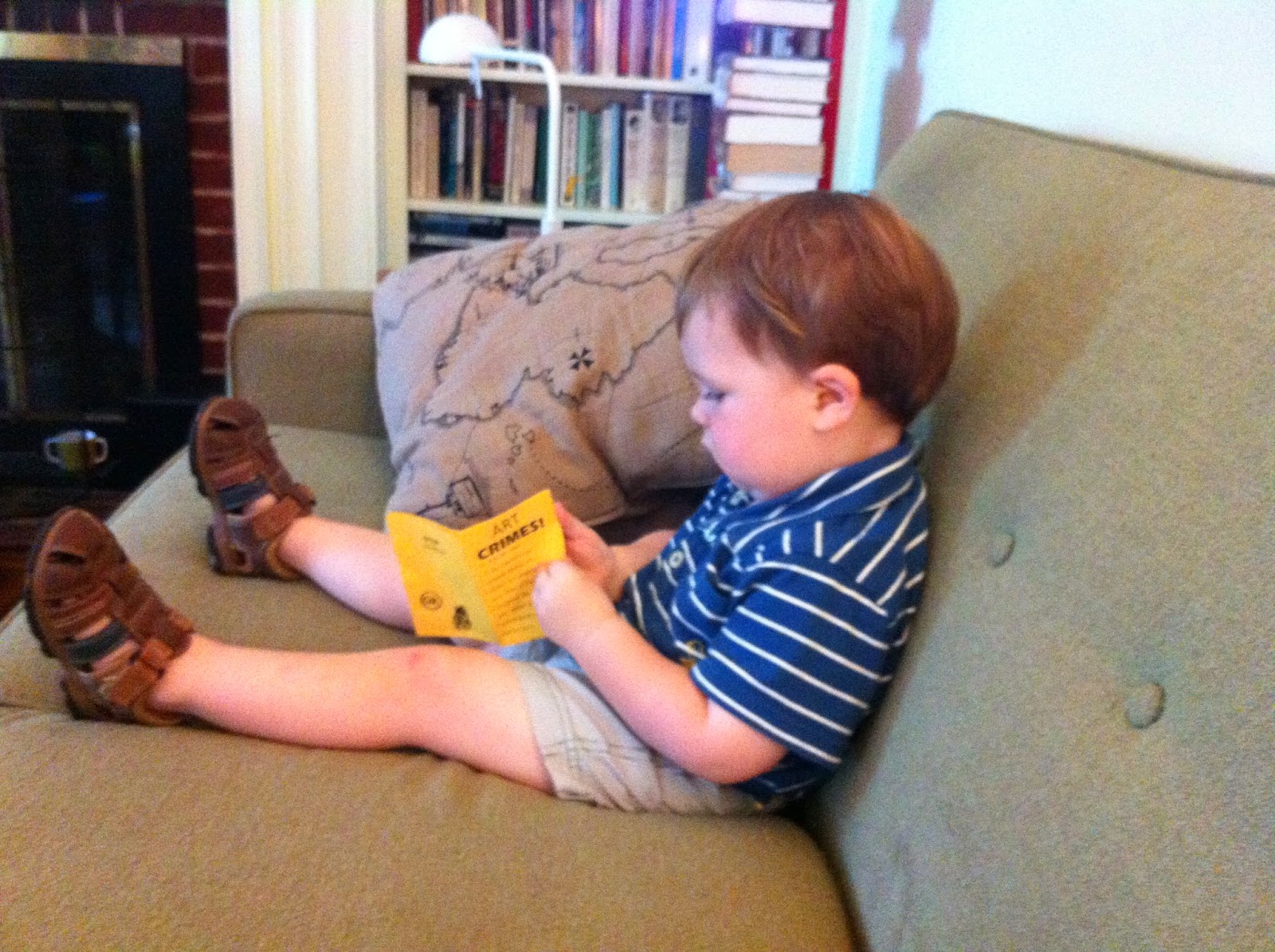 Another thing he will do now is that if Sean says something to him that makes him angry, he will come over and try to hit me!  He did that to Susan once, too, at music class when the teacher told Owen not to throw his drumsticks, he got angry and went over and hit Susan.  (As Susan said to me in a text:  we always hurt the ones we love!) 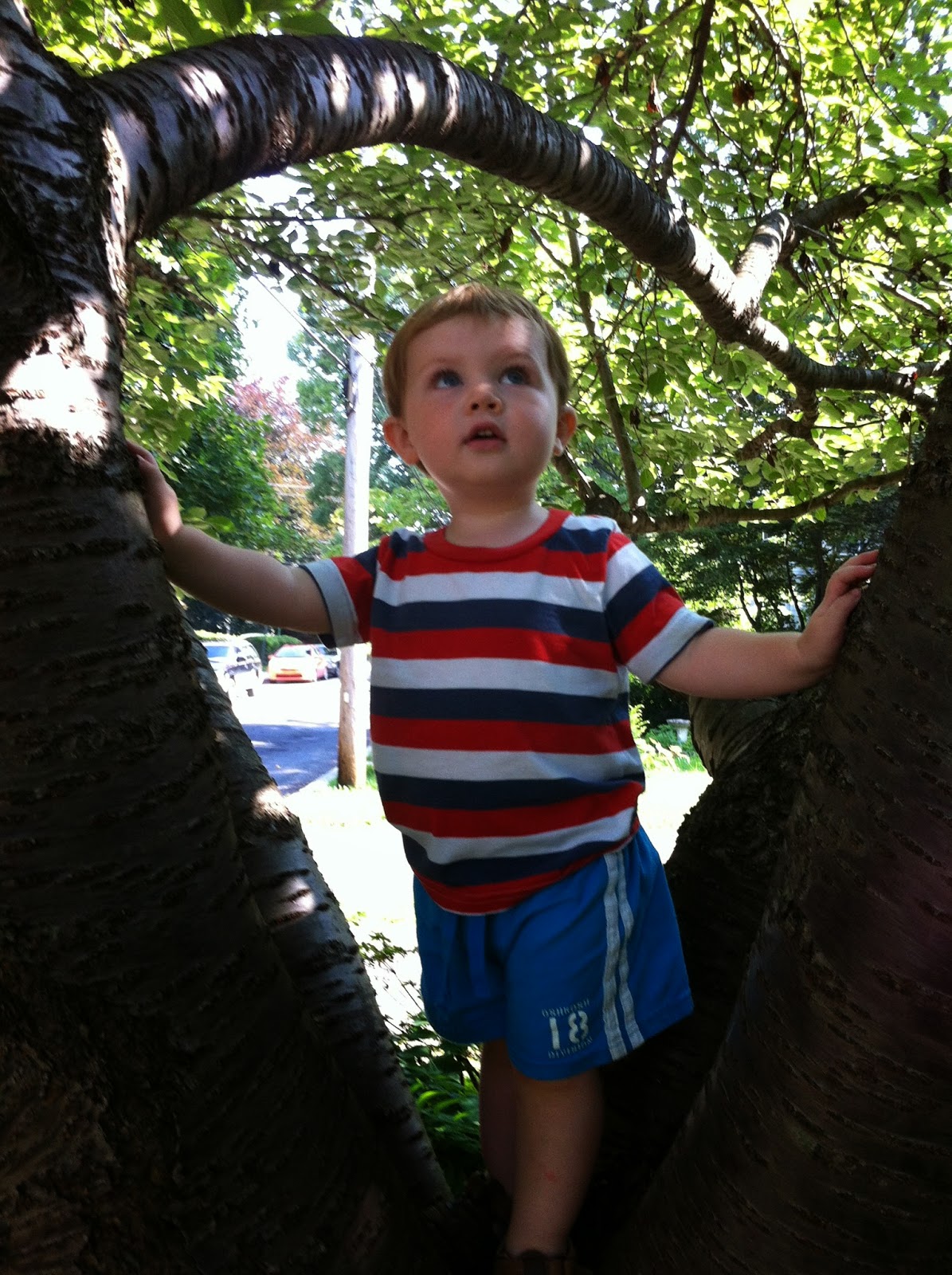 A colleague at work is having the same problem with her similarly-aged son, and she told me he also hits and kicks their dog, which has not (yet) occurred to Owen. 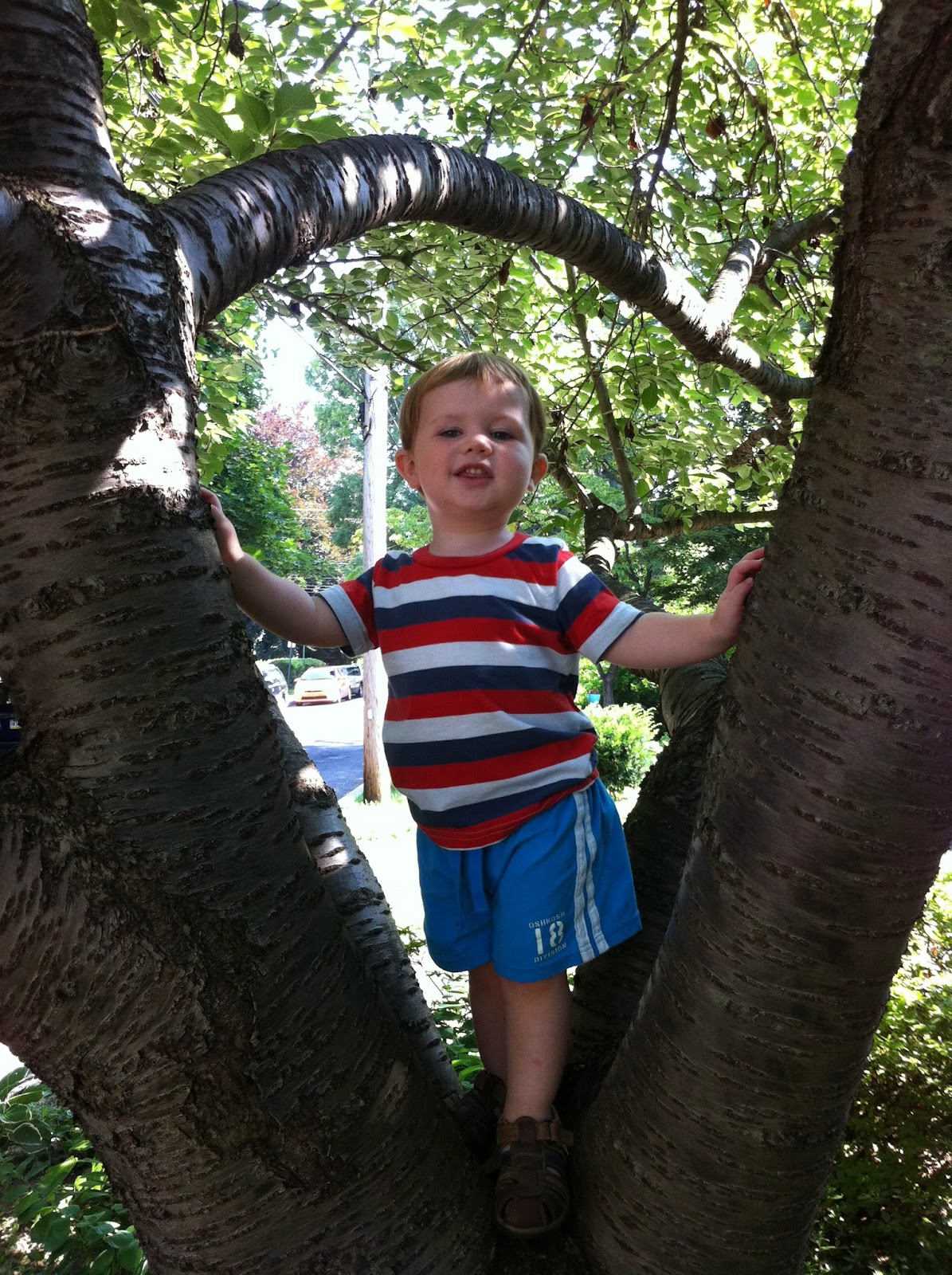 I never thought I would spend so much home time avoiding being pummeled.
Posted by Elizabeth at 9:43 PM

Email ThisBlogThis!Share to TwitterShare to FacebookShare to Pinterest
Labels: discipline, Owen gets physical

Well, at least he's 2. And not, you know, "11". I hope he never realizes that pets could be for pummeling too. T will be raging and punching away and then Frances will get herself caught behind the couch and he'll gently lift her up and out of danger. Then we go back to regularly scheduled raging and punching. I was reading some developmental psych recently and it talked about what's happening to the brain at 2. Basically everything. An explosion of growth all at once, so the brain kind of short-circuits frequently from all that it's doing. So just think of Owen having a little short circuit.