I’ve been a bit blog-shy lately, primarily due to wanting to spend all my free-time first re-reading the 7th and then reading the new, 8th Diana Gabaldon Outlander novel (a guilty pleasure, although really not that guilty, since except for issues with pacing and a tendency to over-swashbuckle, she writes quite well and is an excellent story-teller).  And since her novels are all about 800 pages, it will probably be another week or two before I complete the 8th.  Anyway, I shall pry myself out of the 18th century and let you know what Owen has been up to these days: 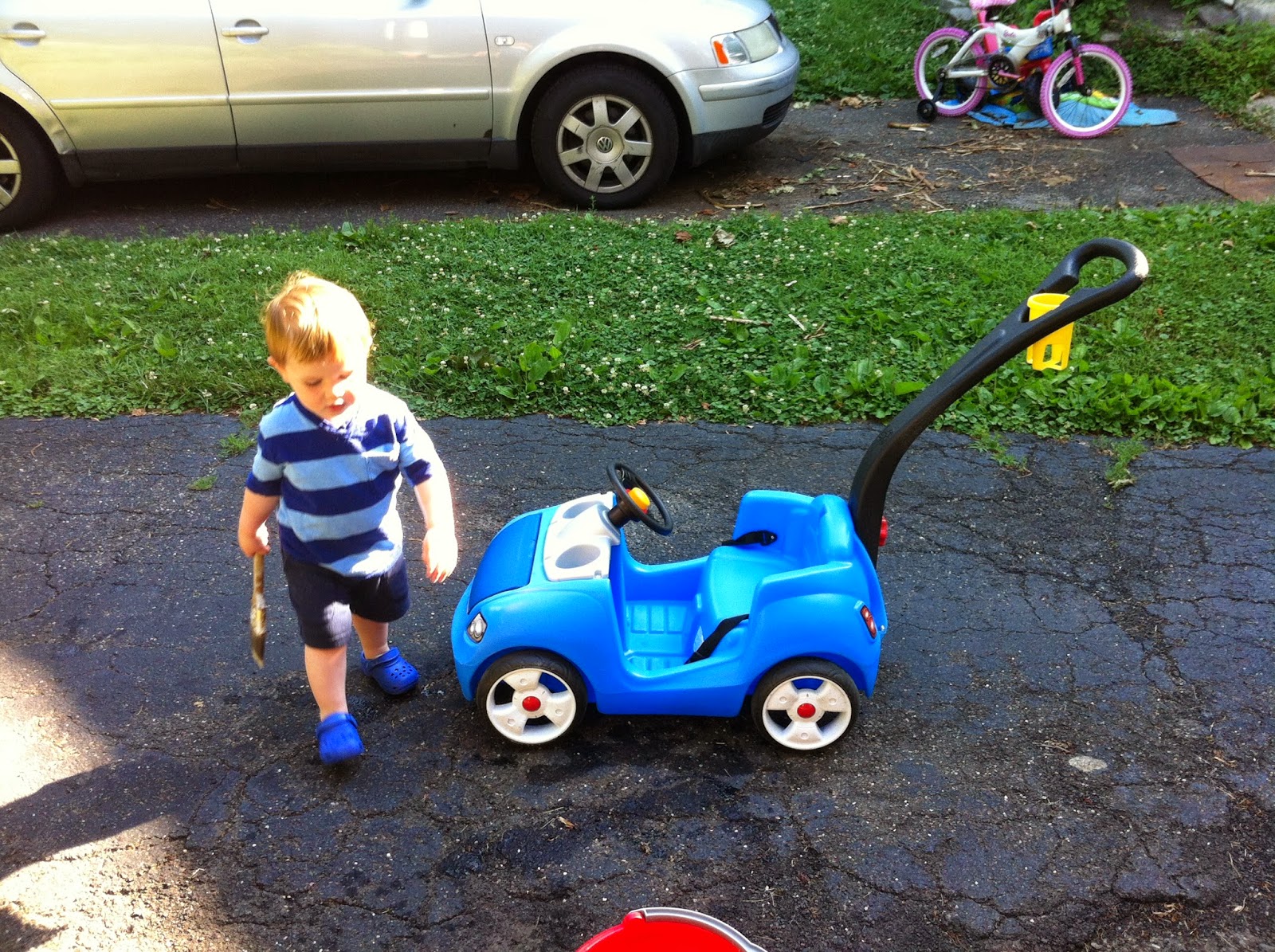 He has been up to CARS.  And TRUCKS.  And BIIIIIIIIIG CARS.  And FIRE TRUCKS!  Pretty much all day long.  The first thing he does each morning is to start bringing certain cars and trucks from where I put them the night before, to scattered about in clumps and lines throughout the living room.  It is something he can play with on his own, so I am all for it, except that he doesn’t know how to hook his trains together yet (trains are categorized along with CARS and TRUCKS), so when he is playing with one of his trains there is a lot of whining involved and one of us has to keep hooking them together.  We show him how to do it himself, but he hasn’t caught on yet. 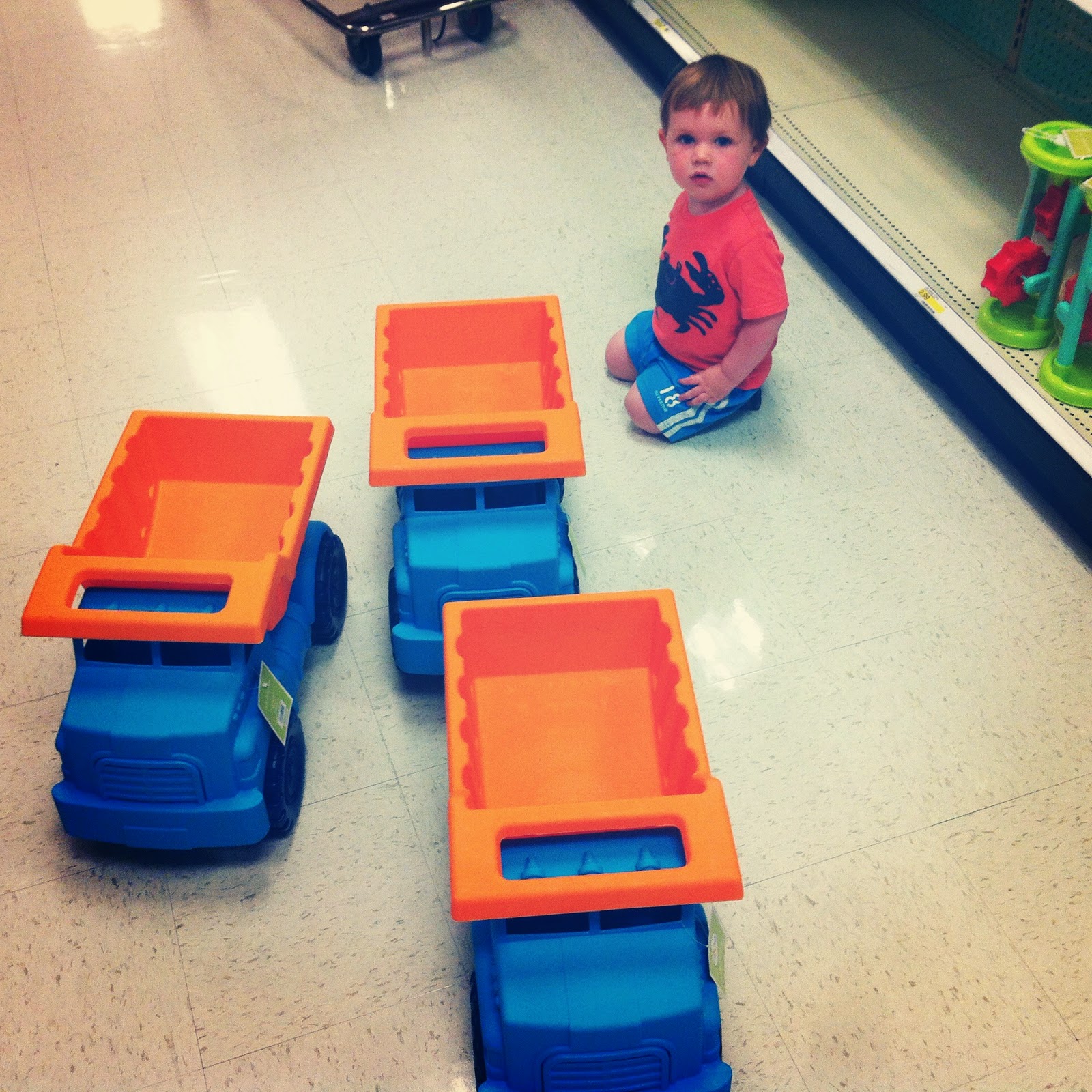 We took Owen to the 4th of July parade in Glenside and it was a big hit.  Almost 2 is really a good age for parades; he can’t scamper out yet and get the candy, but he can get very excited over the twelve or so firetrucks that went slowly past with their sirens a-blaring.  He also liked the marching bands and the mummer string bands, and the Philly Phanatic, and the Belgian horses.  For the record, he was a little creeped out by the man who walked past wearing stilts and long striped pants. 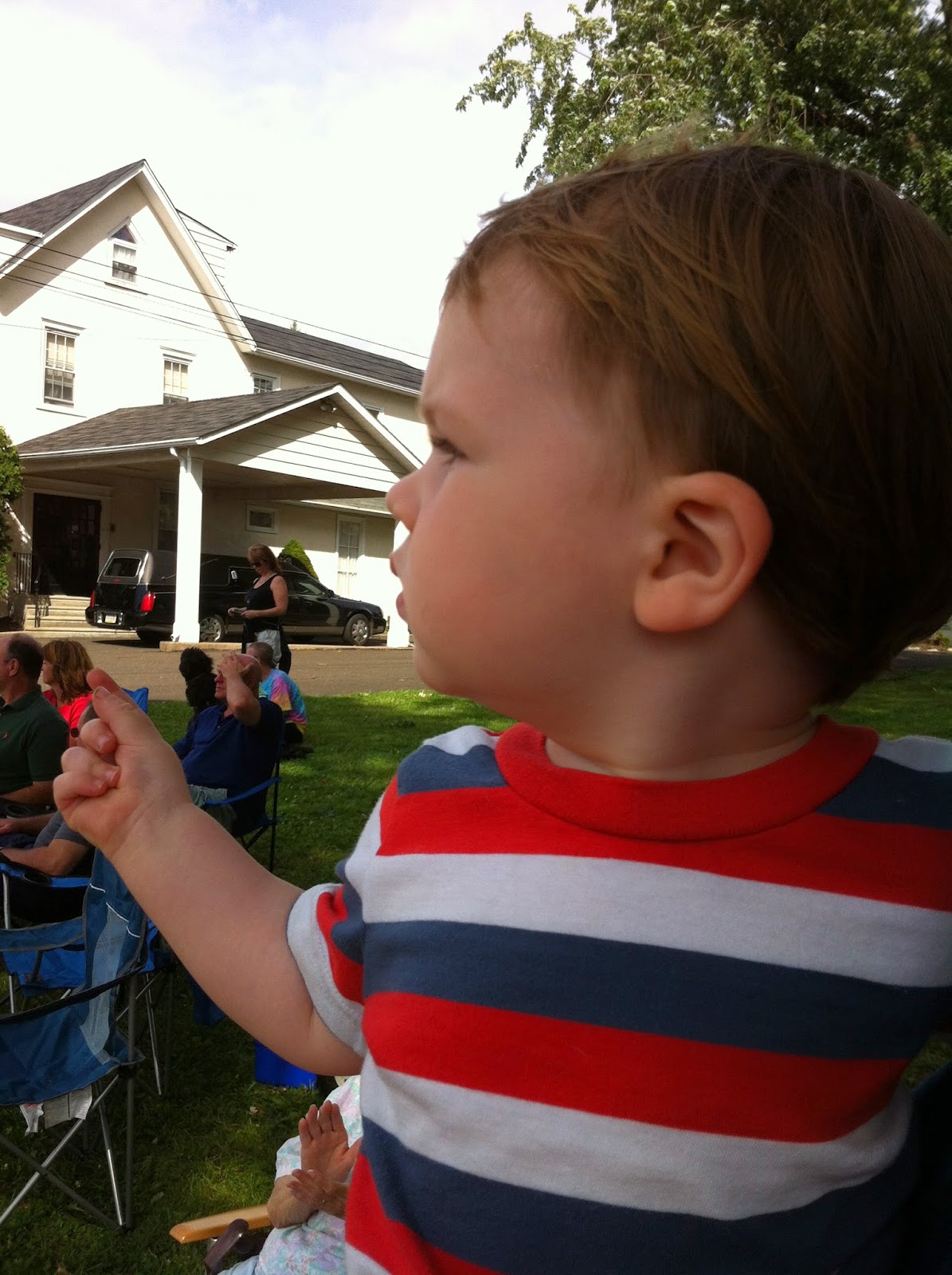 He really loves music, and the minute he hears it, will start bobbing his head in an exaggerated manner, clapping his hands with wide arms, and doing this move he learned in Music Class, which consists of raising his arms overhead and spreading his hands wide and waving them about.  He’ll do all these moves even if the “music” he is hearing is just his parents singing.  And then when we finish singing, he claps and says Yay!  And then “mo” for more. 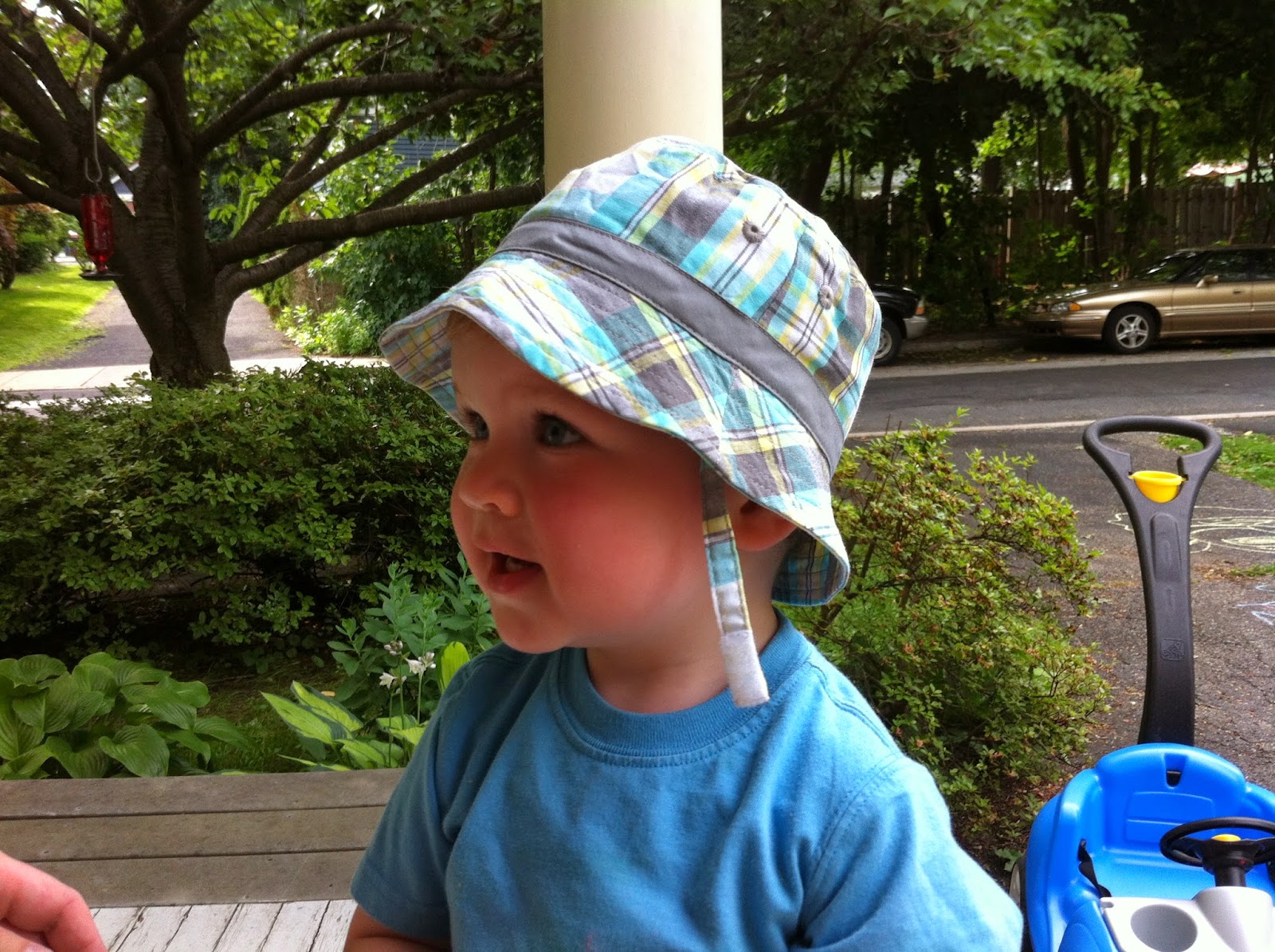 In fact, one of his favorite things right now is when we sing “Old MacDonald Had a Farm” – he gets very excited and will join in on the e-i-e-i-o’s.  I think what excites him most about the song is the choosing of the animal, and then interspersing what the animal says with the singing—that always makes him laugh.  He also still is a fan of “The Wheels on the Bus” for the same reason—the choice of the subject of the next verse. 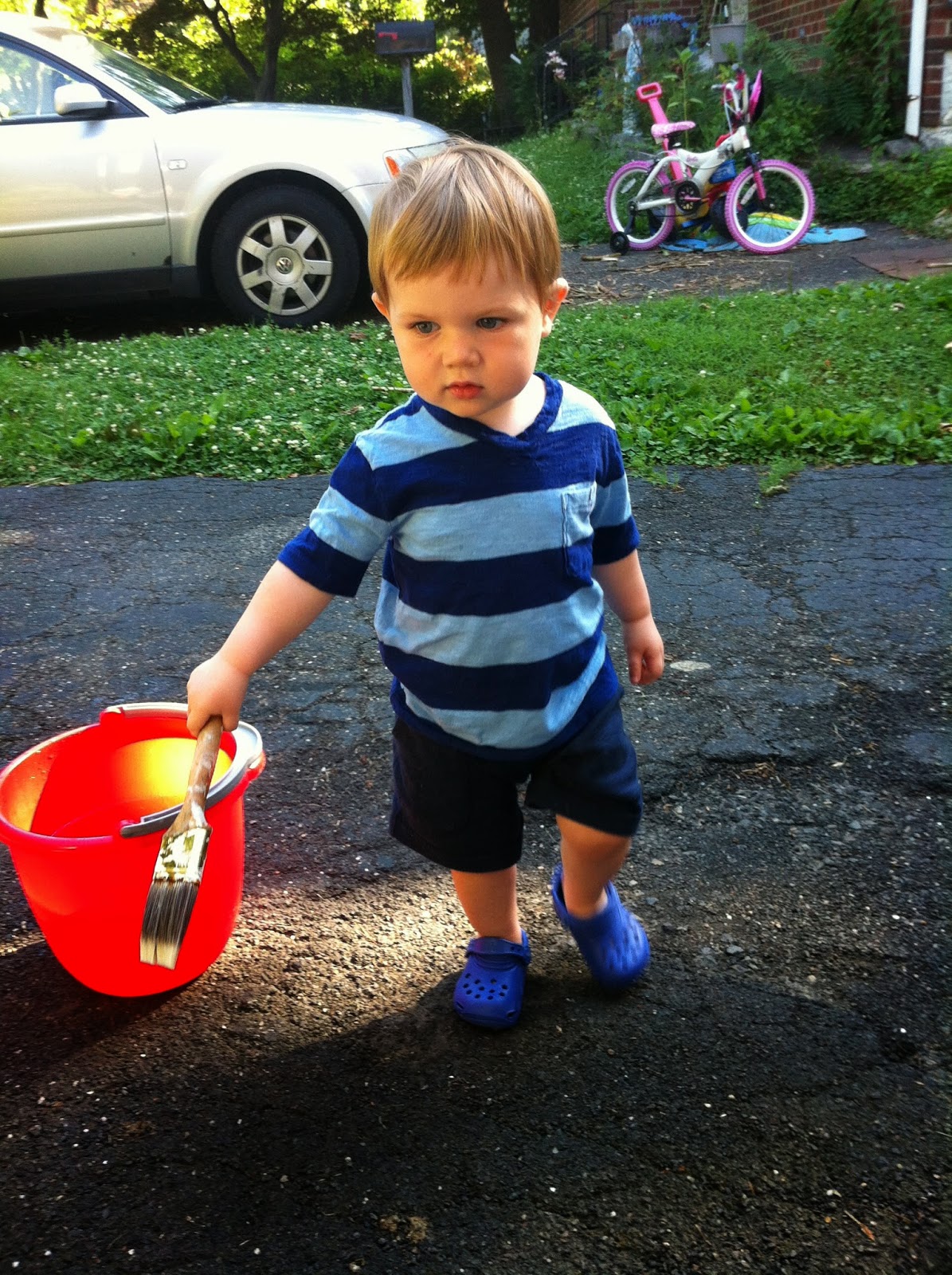 Owen’s favorite thing to watch on TV right now is Peppa Pig, a British cartoon for toddlers.  Coincidentally, I find it as amusing as does Owen, albeit for different reasons.  (Have you seen Peppa Pig?  It’s hilarious!) 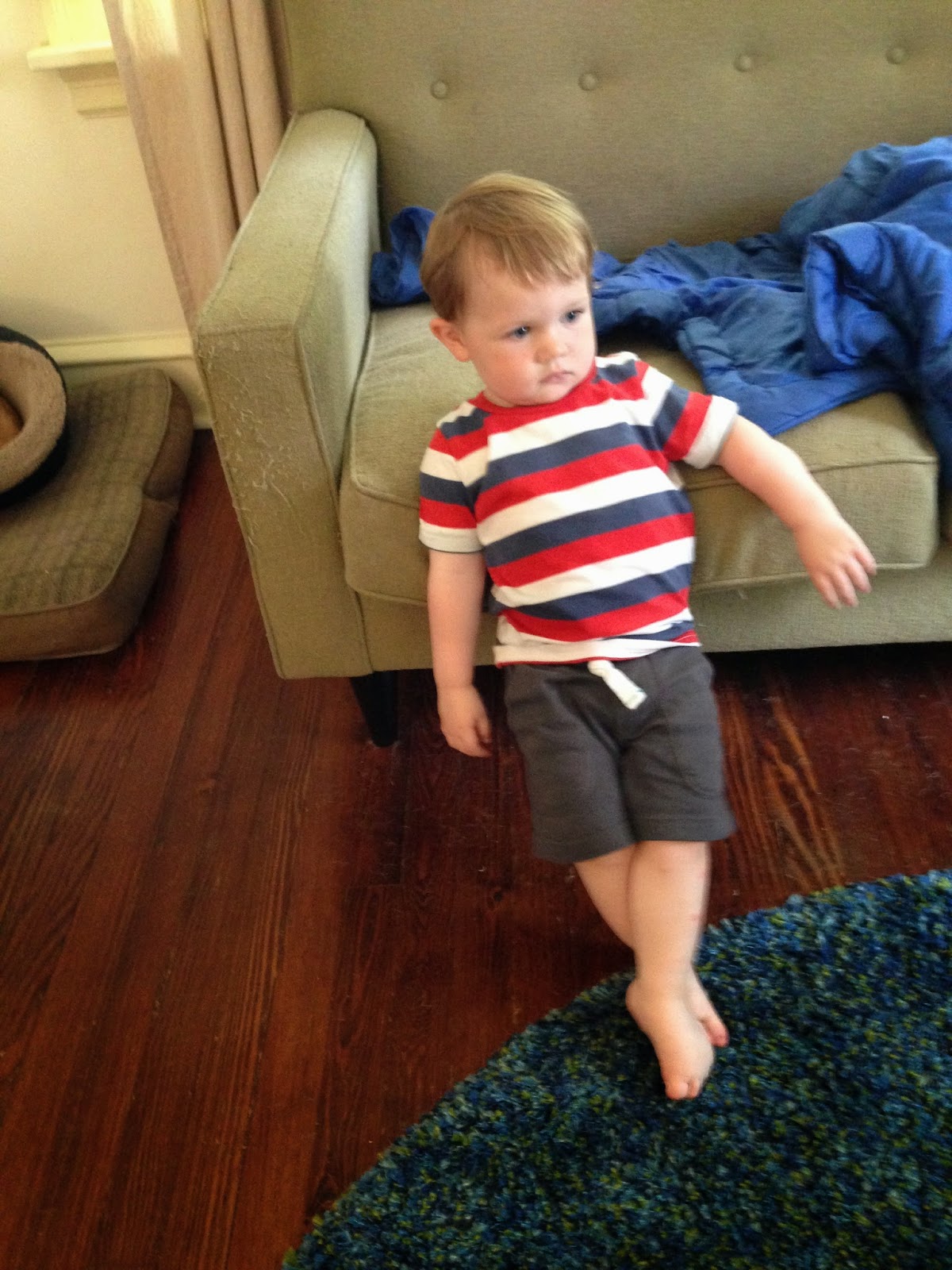 Owen fell on Saturday and got his first scraped knee.  It was not a bad fall by any means, but the whole washing of the wound and applying of the band-aid was a new experience for him.  I had cut my own knee the week before, and all week he had been talking about Mama’s boo-boo and pointing to my knee (often jabbing a finger right into my cut, which needless to say, wasn’t too pleasant).  And now Owen had one of his own!  It turns out that Owen has inherited his stoicism, or lack thereof, from my sister, Meredith.  (Hi, Meredith! J)  Each time he remembered his injury, he would clutch his leg and act as if he were dying.  Sean said it was like he had been in ‘Nam and was having a flashback.  Poor Sean was in charge of the first bath after the wound, in which Owen had to first get it wet, and then have the band-aid removed.  I think Owen’s howls were heard in the next town over. 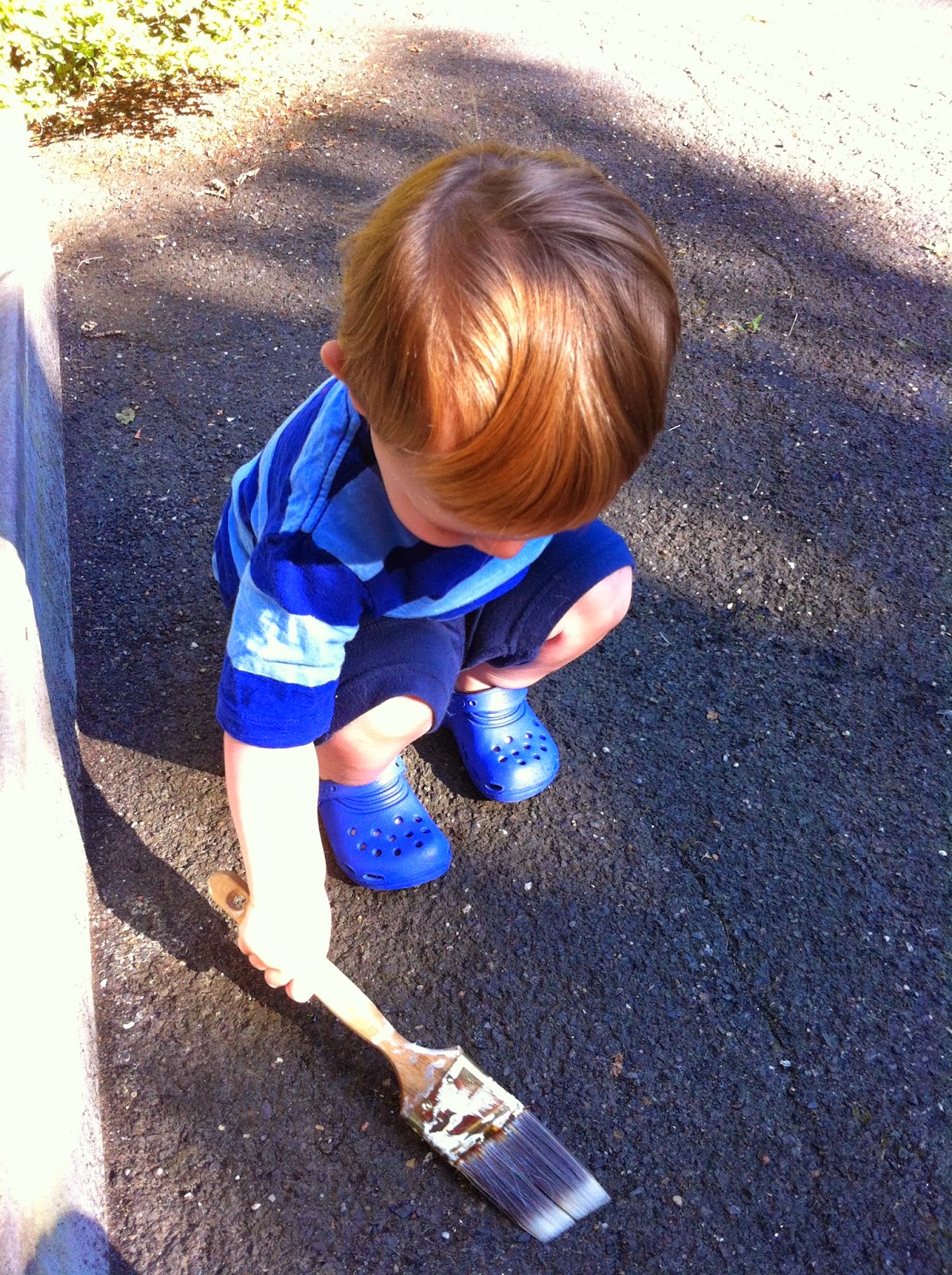 And I think that is mostly it for now.  Owen so kindly did not awaken during the fireworks on Friday night, and also managed to remain asleep during the bad thunder storms we had on the 3rd.  He also was very helpful throughout the long weekend while Sean caught up on the weeding.  As usual, Owen was very pleased to be able to help put the weeds in the bag. 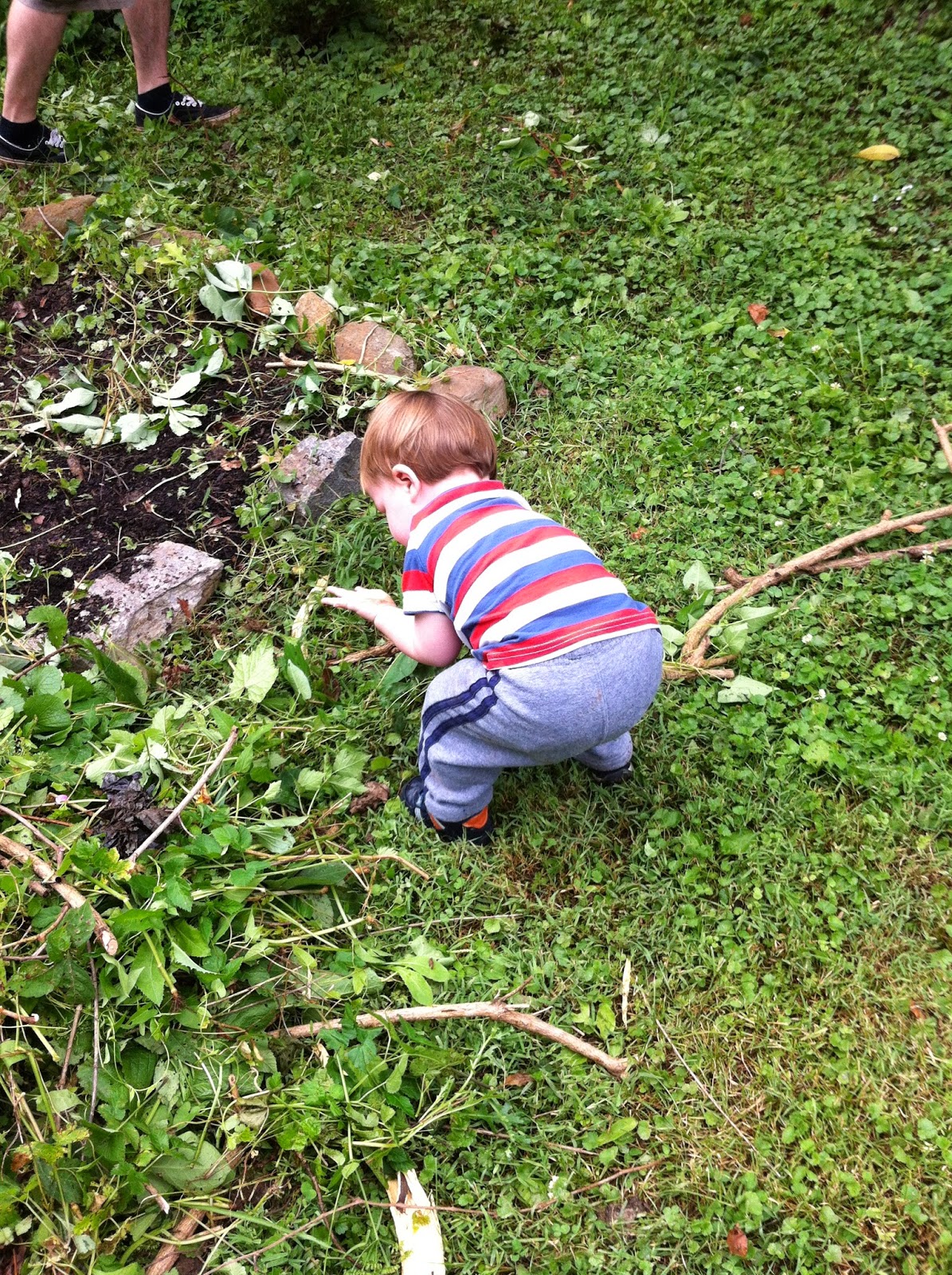 Posted by Elizabeth at 9:34 PM