I am aware that sleep issues are as boring for you to read about as they are wretched for us to experience, so I don’t plan to go into great detail here.  But first of all I’d like to say that the powers that be need to do a better job of letting people know that there is a good chance they won’t sleep much for a good two or so years after first becoming parents.  I mean, I certainly knew that I wouldn’t get much sleep the first few months of Owen’s life.  And I also knew that it was possible I’d get a bad sleeper and have recurring sleep problems.  But I’m pretty sure that no one told me that once my child was allegedly “sleeping through the night,” he would only be doing so for about four days out of seven, say.  And that those wouldn’t be consecutive days:  there seems to always be something disrupting Owen’s sleep. 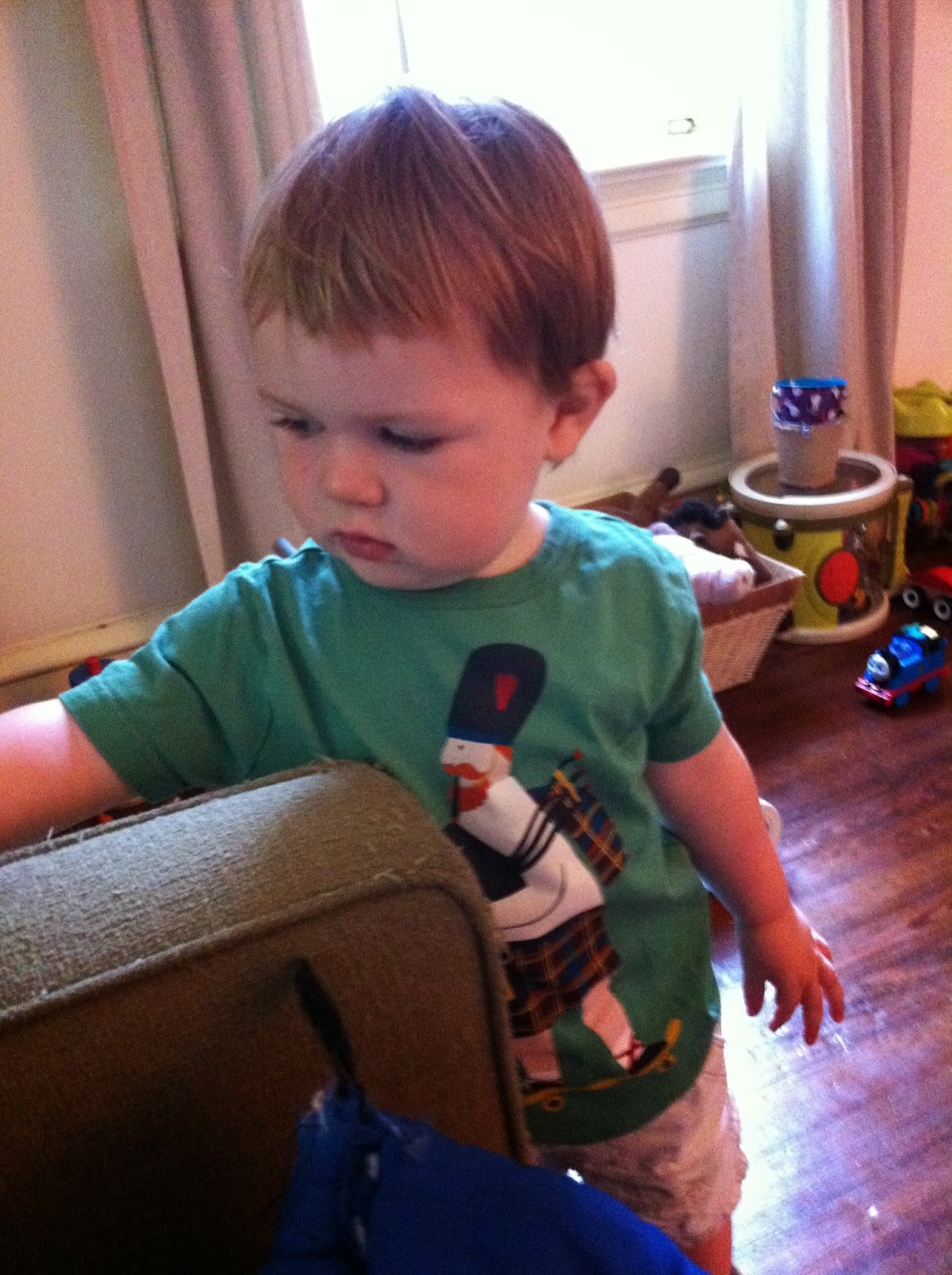 I just think a heads up would have been helpful.  Although come to think of it, my sister’s third child was a bad sleeper, and I remember Martha complaining about it to me on the phone, so it is probably just one of those things that unless and until you experience it, you don’t comprehend its agony.  (And I also don’t remember being warned about what the sound of the crying of your child waking up in the middle of the night does to your nerves and your emotions, and hey, even your bowels.  And that after a sleepless night, I can hear the sound of Owen crying in the hum of the air conditioner at work, and it gives me a jolt.  Or am I sounding too crazy now?!...) 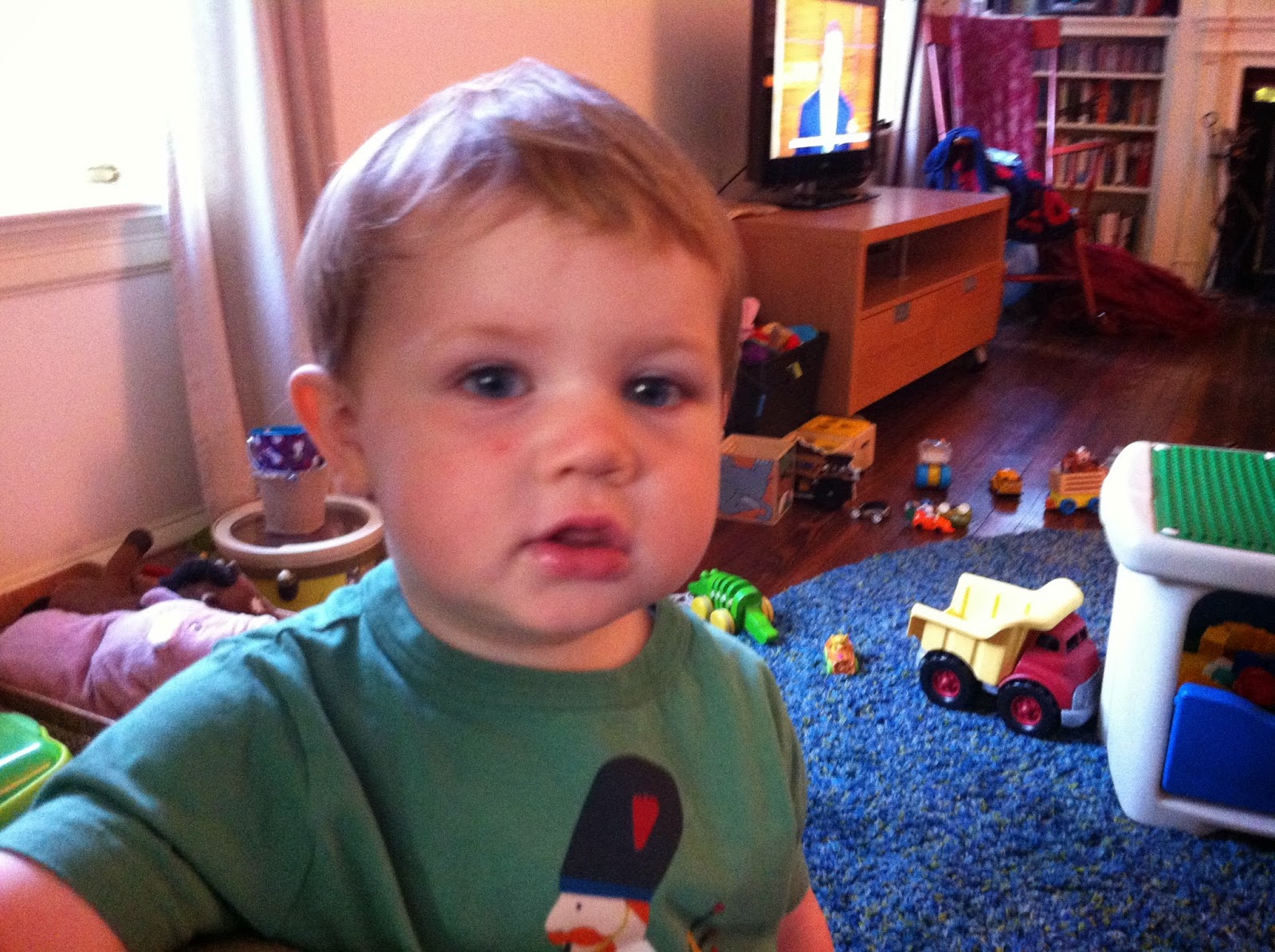 At any rate, to be concise, Owen had been sleeping quite well (and again, by “well” I mean, let’s say, 3 or 4 nights of the week).  Then he got a cold and then there was a two-week or so interval at the end of which we realized that he had completely un-sleep trained us, or rather, he had trained us to again jump up and run to him at every twitch, and then not leave until he was deep in a REM sleep, and that this was hell for all in the family who are not Owen.  So we had to re-do the sleep training, and for the most part let him cry it out, which we did by Sean going into the sunroom and putting on headphones, and me downstairs watching the Good Wife on dvd and timing his crying with crazy-eyed glancing at the clock. 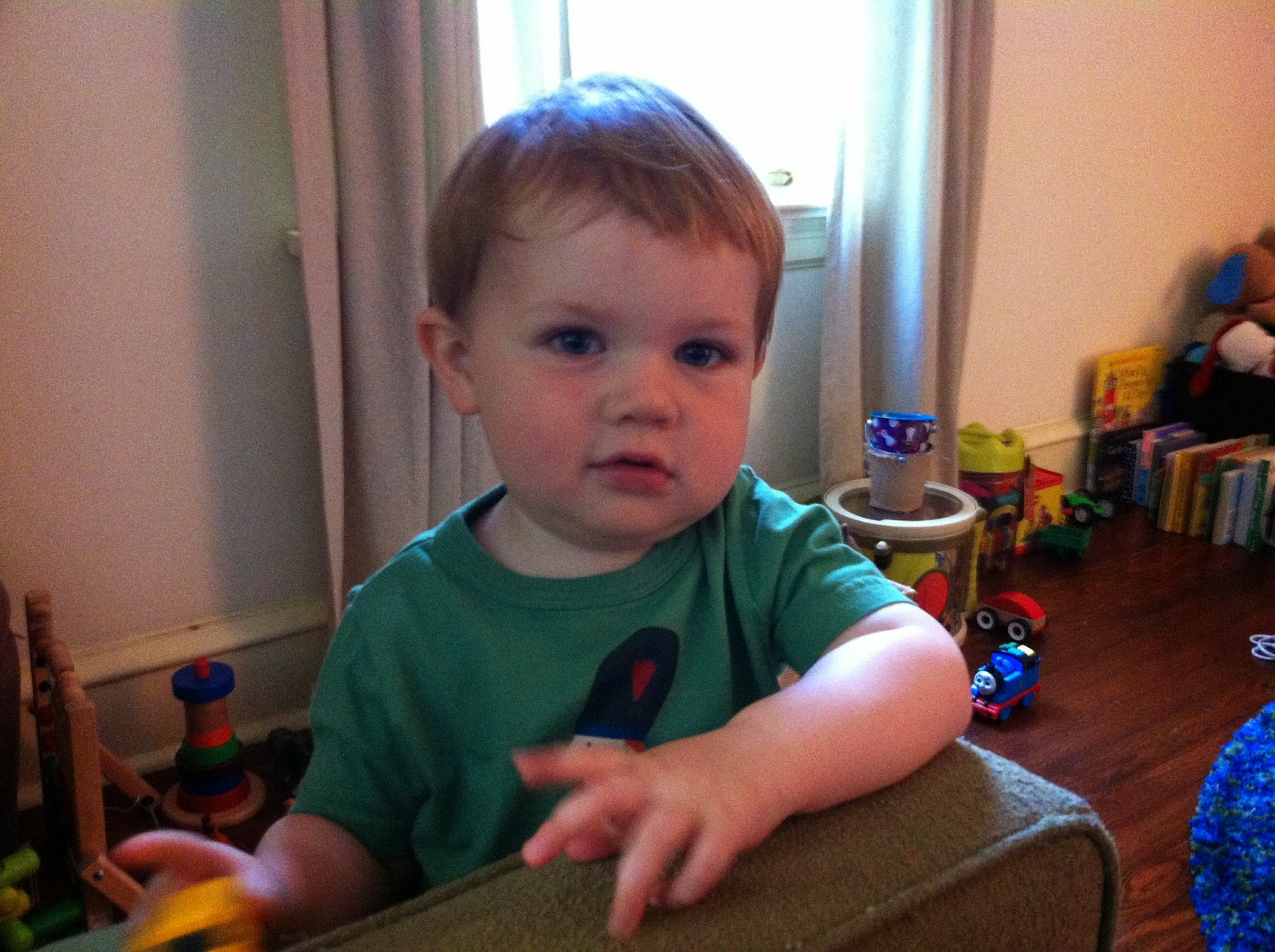 Then all was well for a week until last Friday Owen caught another cold, which led to Monday night’s non-sleep of about two non-consecutive hours for me and Sean.  To throw us off our game – as sleep terrorists like Owen are wont to do – he then slept beautifully last night and didn’t wake up once.  (I got eight hours of sleep people!  That’s the holy grail of sleep!!) 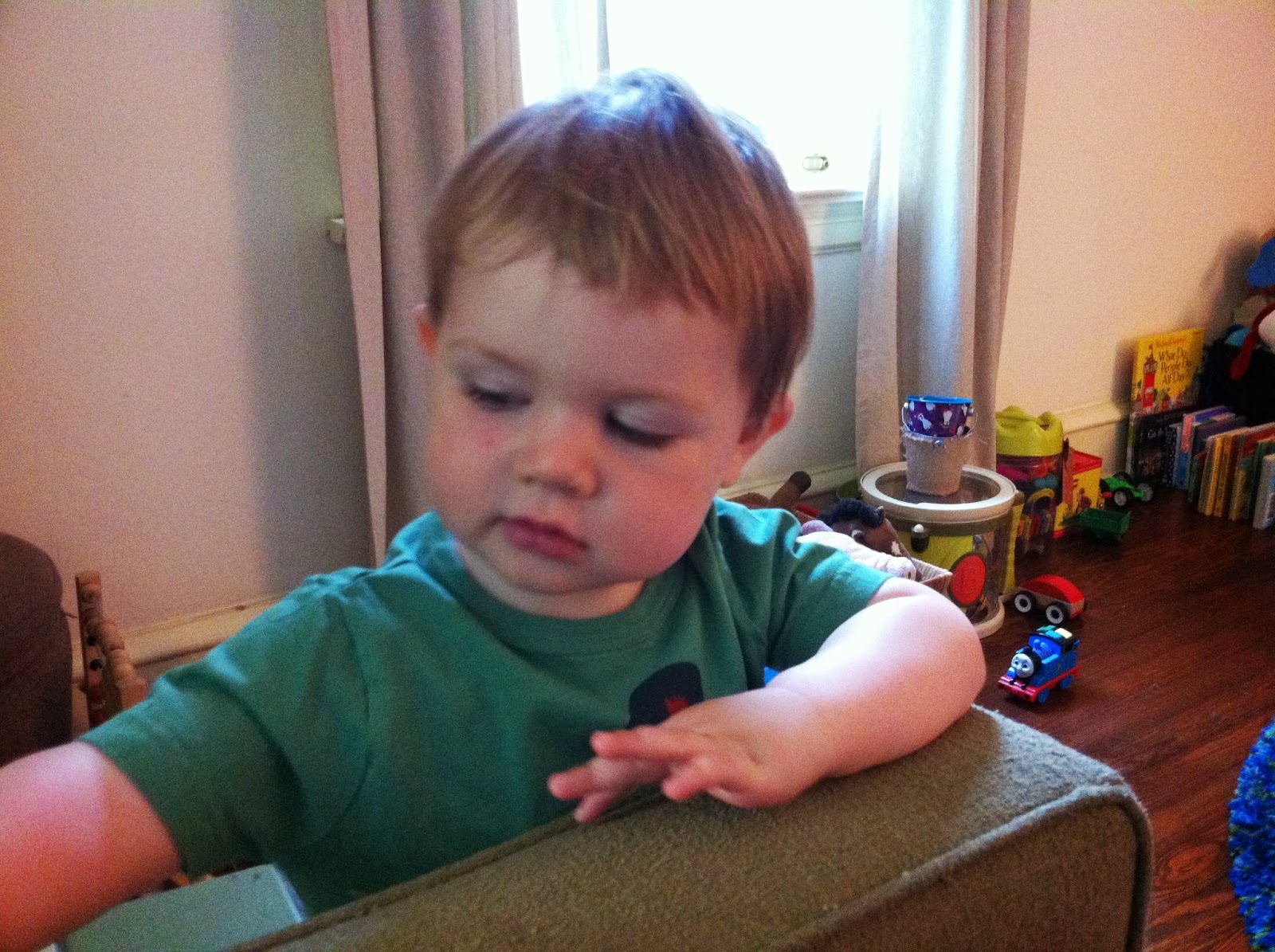 Who knows what will happen tonight?  Which is part of what makes it difficult for me.  If someone could tell me:  you will sleep from 10-12, then be dealing with a fussy Owen from 12-1:30, then sleep for another two hours, etc., I’d be much more relaxed about the whole thing.  For some reason it is the unknown element that makes it wretched, since I tend to be a pessimist in the wee small hours of the morning and will convince myself that neither Owen nor I will ever sleep again.

So wish us luck.  Or wish me to stop talking about this – take your pick.  J

Owen looking bright-eyed and bushy-tailed
no matter how wretched the night: 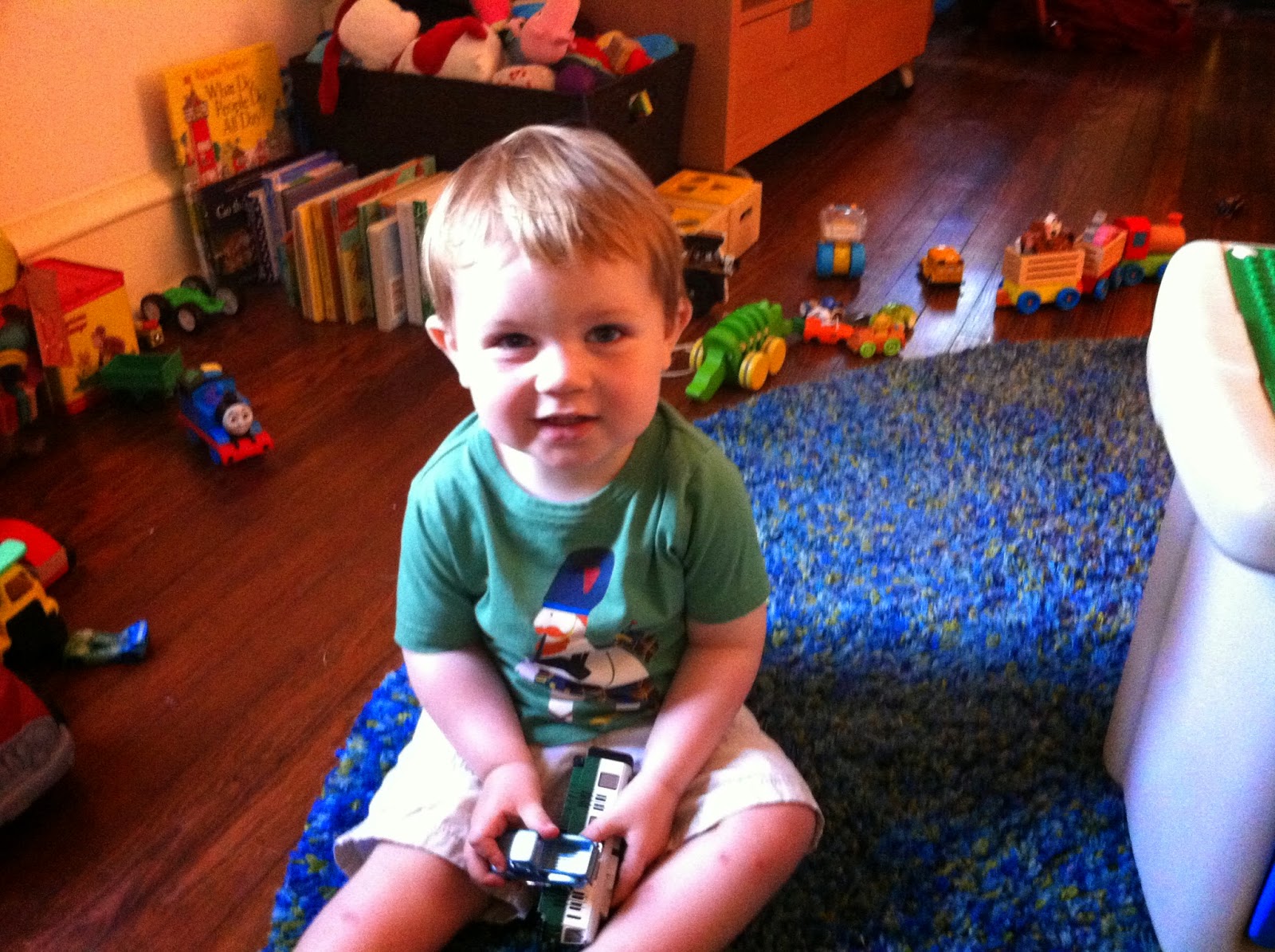 Posted by Elizabeth at 8:01 PM

As I'm sure your mother has already told you, "this too shall pass" while reminding you of the days when you were a teenager..... If that's no comfort, I'm sure that baby Ben could have matched Owen in the sleep terrorism department. We had to do the horrible sleep training while living in a one-bedroom apartment. He was almost two so had plenty of lung power and staying power. Now, at 31, he sleeps like a baby. Ha, ha.