Spring seems to be the season for birthday parties, as Owen keeps coming home from school with party invitations tucked into his backpack. This is our first time on the kid party circuit, and I admit to finding the experience strange.  Especially when the experience involves teenagers dressed as superheroes dancing in a basement. 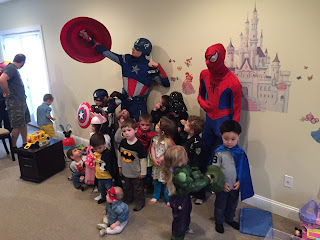 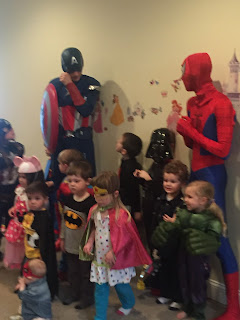 He did have a party at a nice playground near us that we hadn’t been to before, and indeed didn’t know was there.  So now we have a closer playground to visit, which is a plus!  This playground had a tricycle feature too: 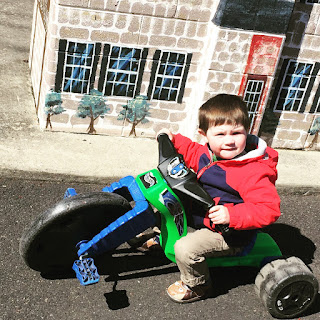 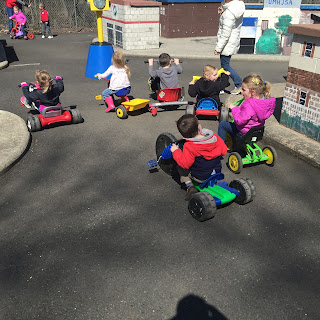 Owen’s birthday is in August, when people are generally dispersed, so I’m thinking that will get us out of having to have a kid party for him for another year or two.  We are birthday party scrooges.  Bah, humbug.

For the first party we went to I made the mistake of trying to involve Owen in the wrapping of the gift.  Rookie error!  Owen of course was very upset to see the cool toy that was not for him and became absolutely hysterical, poor fellow.  I think he was even more unprepared for this by the fact that he’s an only child, so all toys in our house are generally for him.  We need to practice Sharing.  However, I learned my lesson, and wrapped the second birthday present the following week on the floor of my closet with the door closed.
Posted by Elizabeth at 7:53 AM