For the past month, Owen’s vast collection of Thomas trains have remained in their basket, while his toys of choice are his large (Avenger?) superheroes and the small ones with big feet (for easy standing on surfaces).  He plays with them for hours per day, and the play usually involves groups of them fighting with other groups.  He always wants us to play with him too, although I like to annoy him by having my assigned superhero (usually the Hulk) request that everyone sit down and talk about their feelings.

Sometimes his affection towards his heroes coincides with his affection for his toy kitchen and foods, and then we get a moment like this one below, where all of the heroes are having a picnic (note one has a delicata squash on his lap). 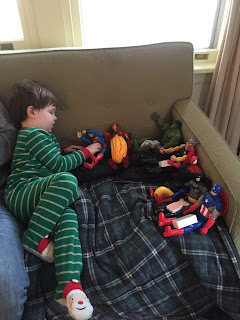 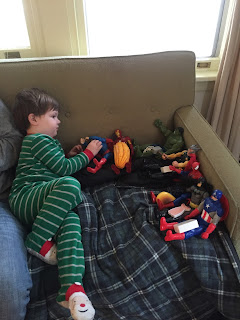 Sean has also brought home a few large boxes from work so that he and Owen can build a rocket ship and go on missions.  I often come down to the living room to see this scenario: 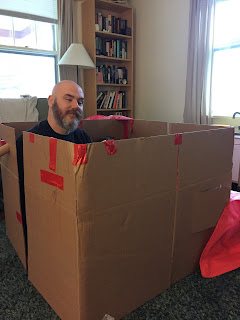 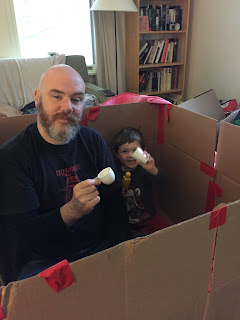 Poor Dorothy is assigned the role of Space Monkey, who attacks the ship and gets battled.  When the ship is quiet, it will attract a smaller space explorer, like so: 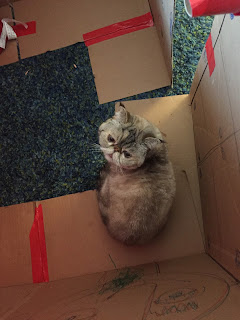 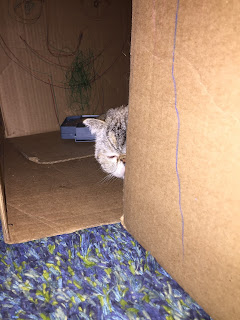 Ground control to Major Tom!
Posted by Elizabeth at 8:16 PM