One of Owen’s favorite things to do at the moment is play with a small flashlight of Sean’s.  He will shine it on the ceiling and on the walls and then on his own two feet, upon which he will often do a little dance.  Here he is enjoying the flashlight: 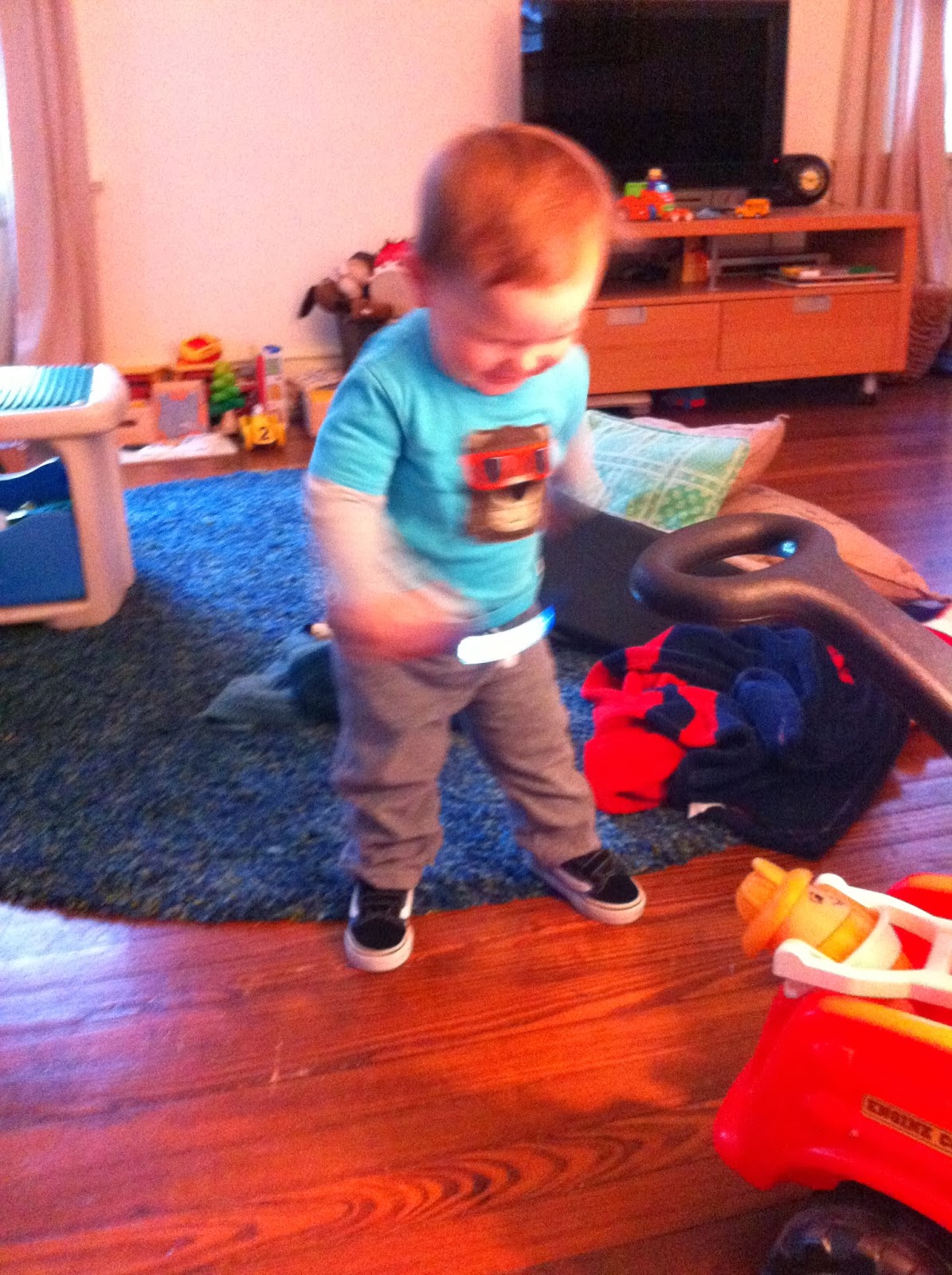 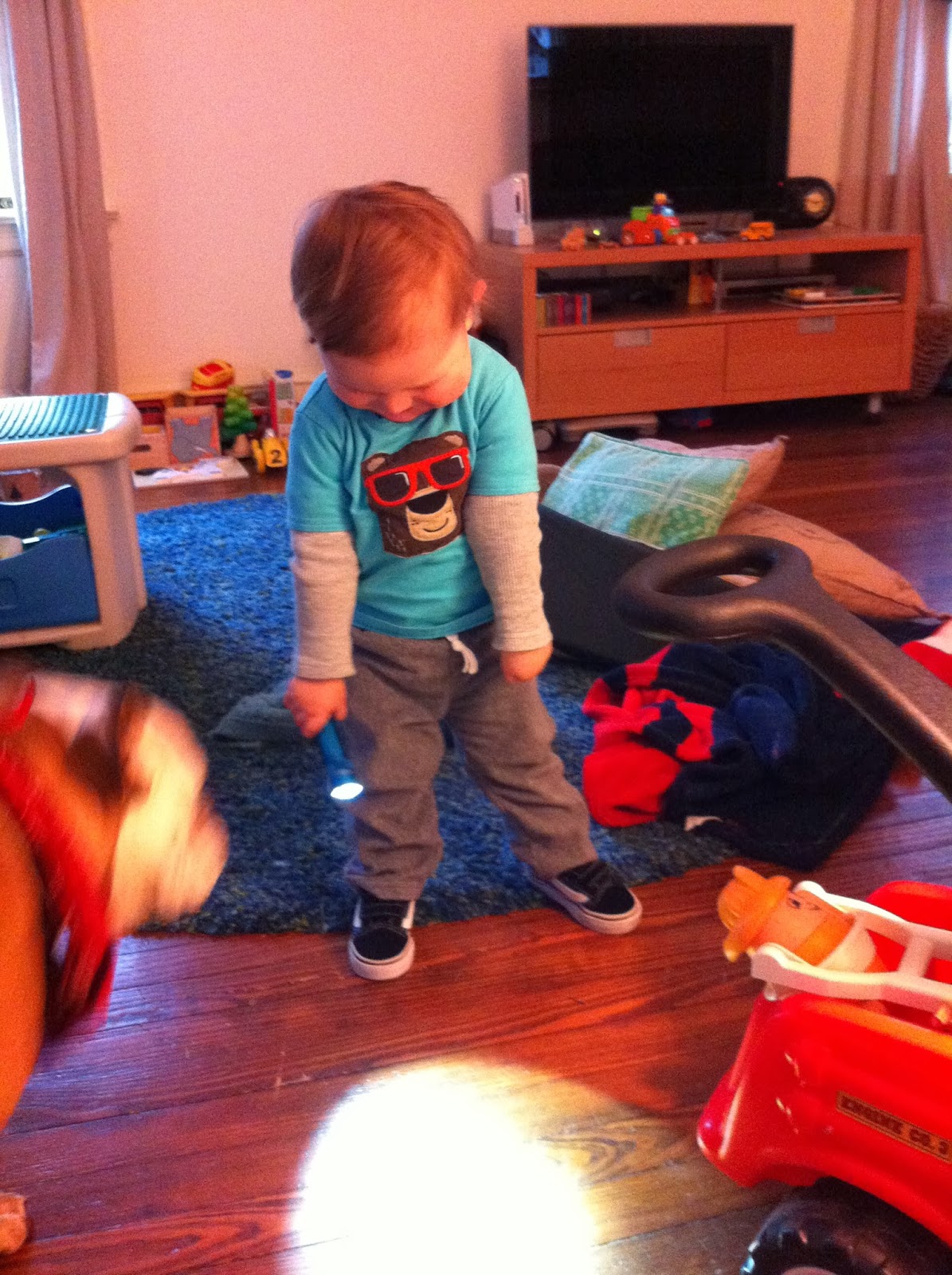 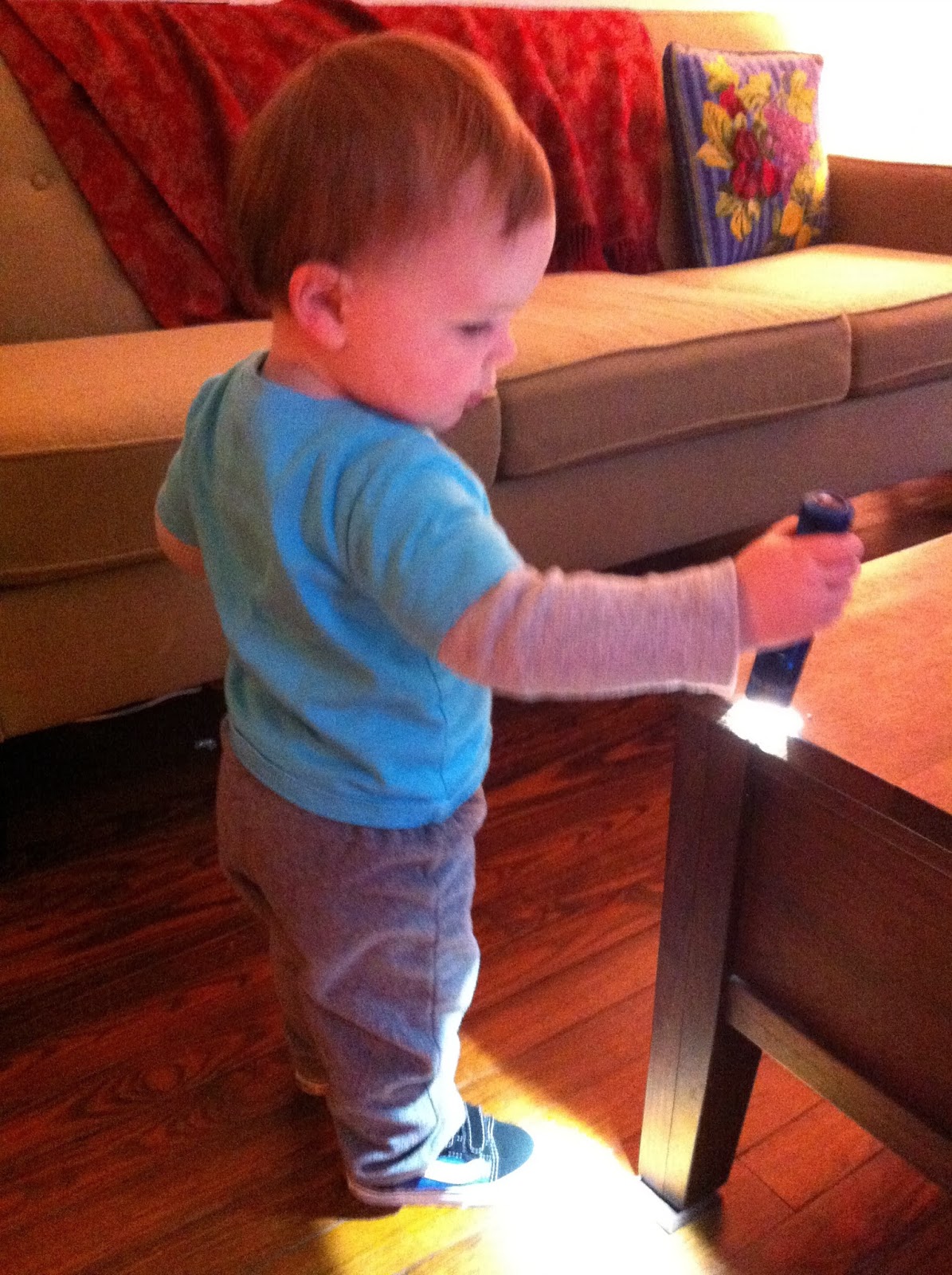 He also likes to exercise his sense of smell and will sniff things if told to do so.  Here he is in Target with Susan smelling the candles. 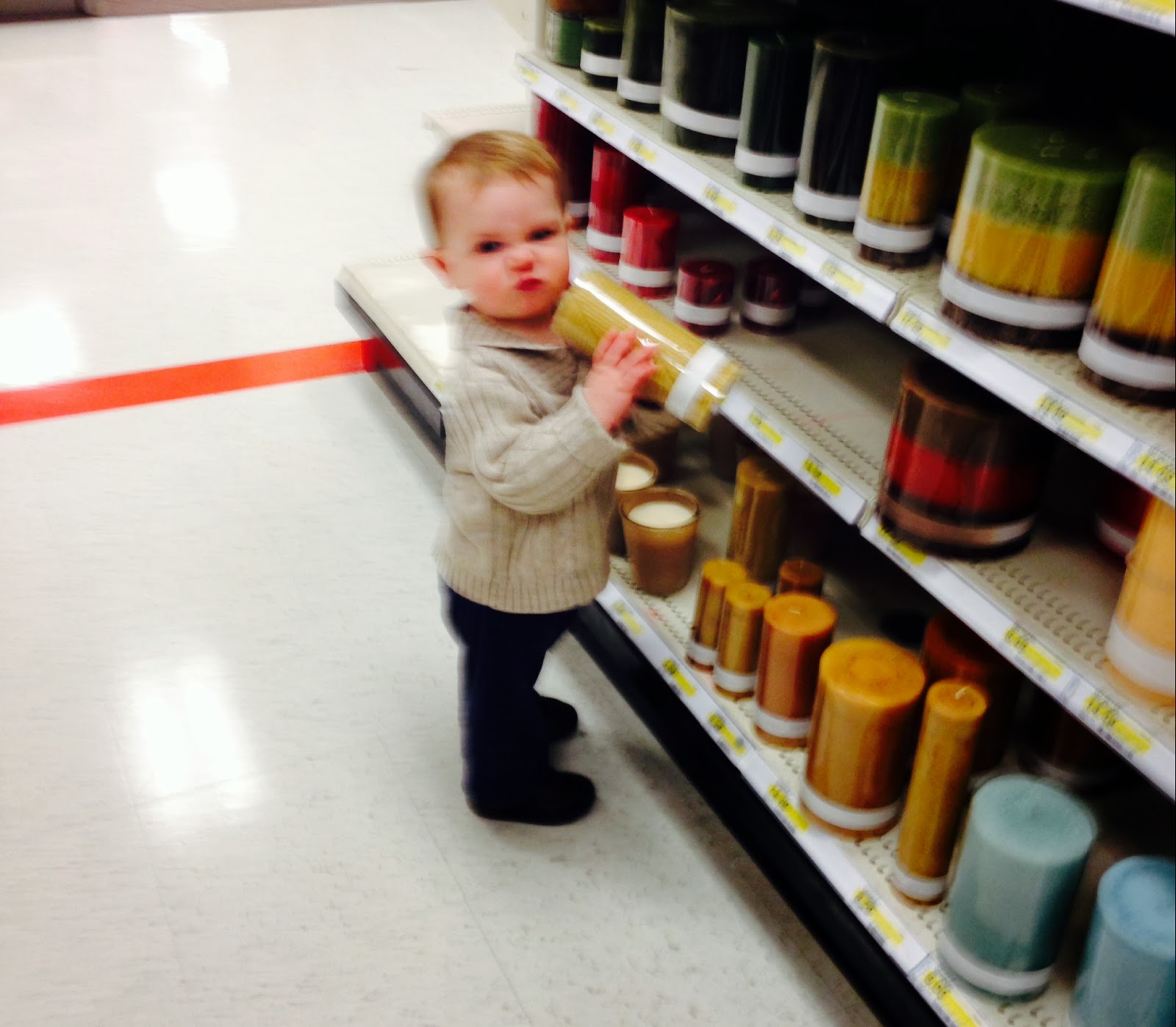 Another of his favorite activities is to put his toys in stacks and piles.  I was reading something the other day about what a 17-month old likes to do, and it said something to the extent that your 17 month old likes to categorize, so will probably start sorting his toys and putting like with like—so Owen is pretty much textbook right now.  It’s the first thing he does in the morning when he comes downstairs and see his toys—he starts to move one kind of toy to the coffee table, while chortling happily. 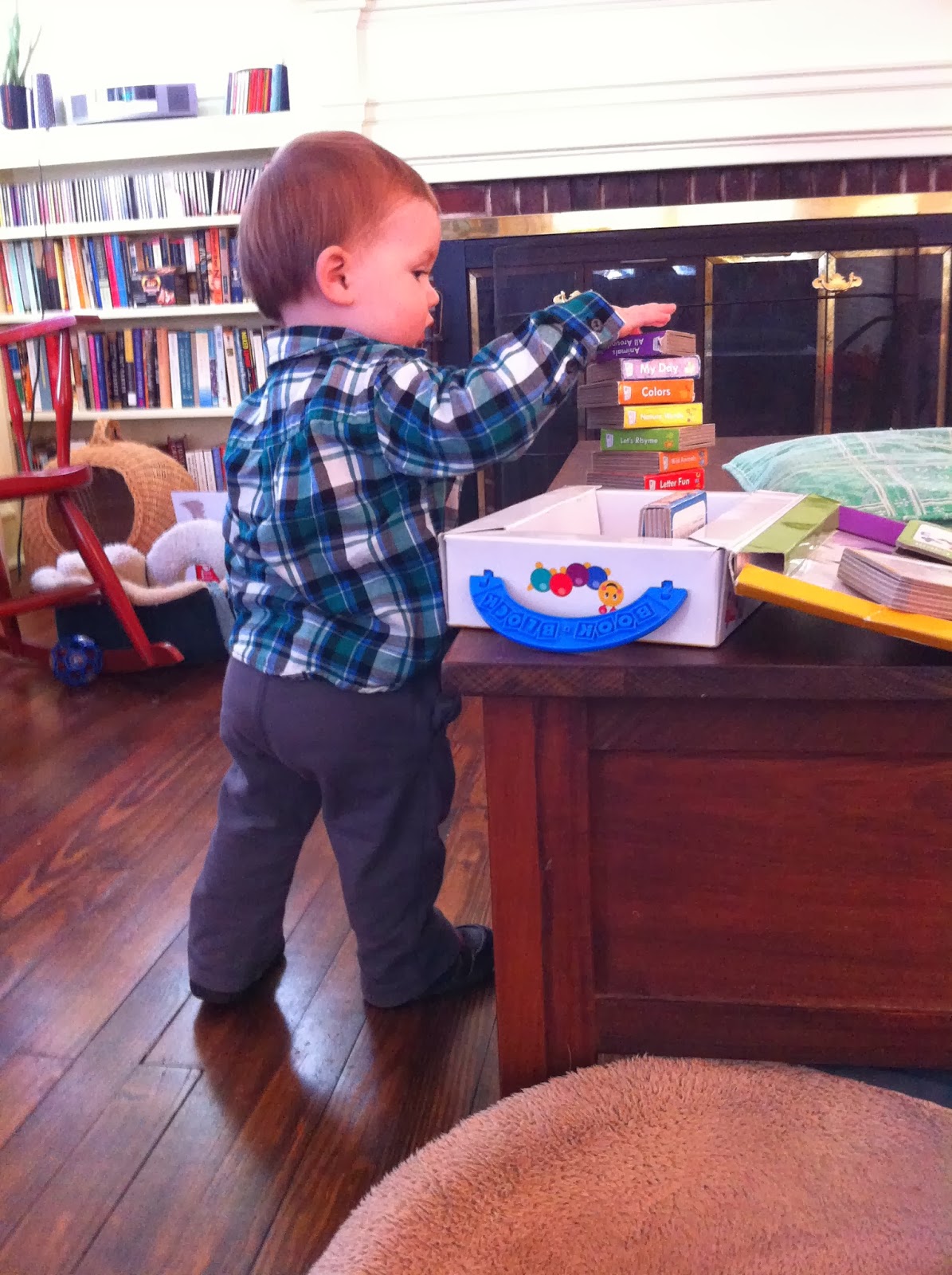 He likes music and will stop and dance to it.  He will also often sing a La La La, although I haven’t really noticed him singing anything in particular yet.  One night I was holding him against my shoulder as I tried to get him to go to sleep, and started singing a Christmas carol; after a minute or two, he joined in and started wailing a little complementary tune.  Which would have been cuter, had I not been trying to get him to fall asleep!  At the moment he is on a brief hiatus from his music class, but will hopefully start again soon.  In the picture below he is singing to himself while he plays with his blocks: 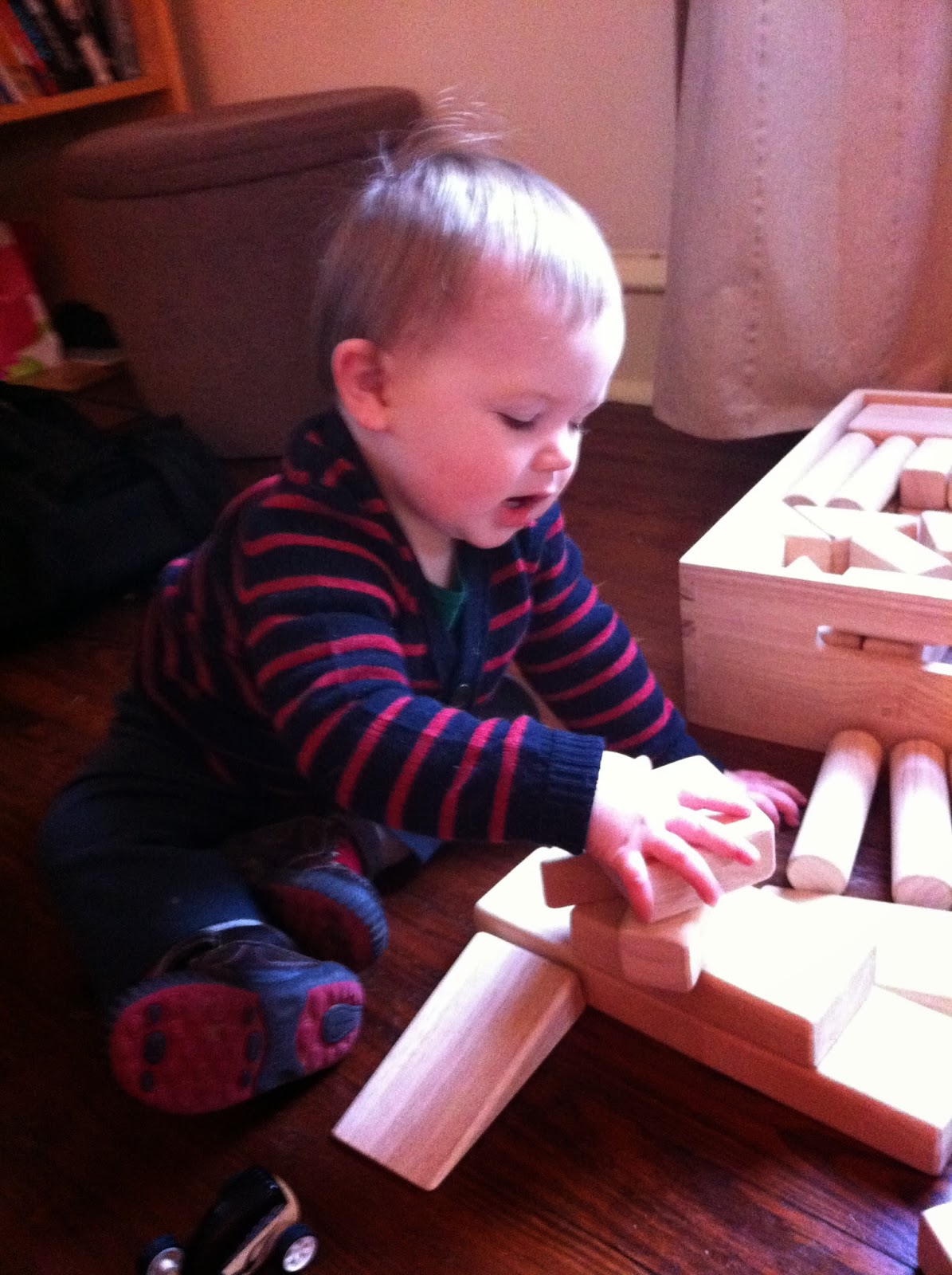 Owen’s mealtimes are still not much fun.  He’s not necessarily a skinny toddler, so he seems to be getting enough to eat, which is good.  But he only eats the same old things and spits out anything new we try to give him, as well as any vegetable that isn’t in babyfood puree form.  He most definitely does not trust us now when we give him something new, even if it is something that he should like—like cheesy risotto, a healthy version of chicken nuggets, sweet potato fries, or pasta.  So basically he eats fruit, whole wheat bread, cheese, bagels, oatmeal, tons of yogurt, and any kind of sweet or salty snack.  He can do better!  So we continue to each night put food on his tray and in his mouth and he continues to ignore it or spit it out.  I suppose we are at an impasse.

Since writing the above he did surprise me by eating couscous and a few mouthfuls of scrambled eggs.  But whether or not I can get him to repeat that remains to be seen.

He is definitely a busy and mostly happy little fellow.
Posted by Elizabeth at 12:29 PM