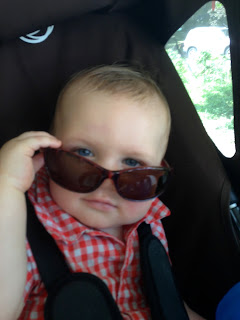 Since beginning to crawl in earnest a month ago, Owen very shortly thereafter began to stand while holding onto things.  He now crawls very fast and very loudly (hands and knees slapping the ground with purpose), but seems most proud of the standing.  His feet still appear more decorative than useful at this point—they are so round and solid, and look like two dinner rolls, as Sean puts it.  But I have no doubt that soon he will realize he can take a step or two on them.

We make a ruckus if he gets too near a reclining Plum, so he pretty much will avoid Plum and crawl right by him now.  I’m sure at some point Plum will hit Owen, and I’m hoping that he will not use his claws.  Dorothy is not so sure about Owen’s new mobility, and will often go over to him and try to kiss him mid-crawl.  Posy runs away when she sees Owen coming—she wants nothing to do with the boy.

Other random Owen moments:  Susan has been getting Owen to make faces that show different emotions.  Here is his mad face: 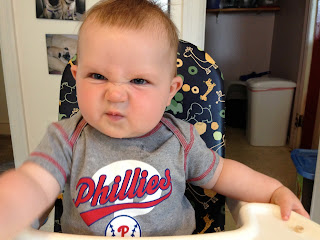 He started playing peekaboo by hiding behind the curtains—and he did it the first time by himself.  We all say “where’s Owen?” and he laughs and laughs, with of course most of his fat little body in plain sight where the curtain ends. 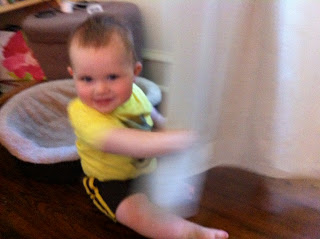 He also does two different kind of “dances” now.  One is a spazzy moving-his-arms dance which he tends to do in his high chair, and the other is a kind of rhythmic sway he does when he hears music.

And finally, when out on a walk Owen loves to touch reachable objects, like trees and leaves and posts.  He’s very gentle about it and seems to really like the different textures.  He will also say “duh” when he sees a dog outside and “buh” when he sees a bird.  He will really follow the birds with his eyes and watch them intently.

Posted by Elizabeth at 7:07 AM