We had a low-key Fourth of July celebration this year.  Feeling somewhat lazy, I decided that since Owen wouldn’t remember it anyway, I could wait a year to bake a flag cake and festoon our front path with flags and pinwheels.

We did go to the 4th of July parade in Glenside, however, despite the 90-degree temperatures.  We put Owen in the baby bjorn on Sean and headed out to see what we could see.  While we were waiting, both Owen and I tried some Mister Softee soft-serve for the first time, while Sean had a reunion with an old favorite.  For the record, Owen liked the few spoonfuls of vanilla I shared with him, but wasn’t as equally enamored with the rainbow sprinkles.

While waiting for the parade to start, we entertained Owen by flipping open the car key—this always makes him smile. 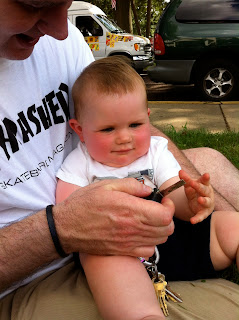 And then he was quite willing to watch as the various bands and horses and firetrucks went by.  This being the Philadelphia region, of course one of the acts was a Mummer string band. 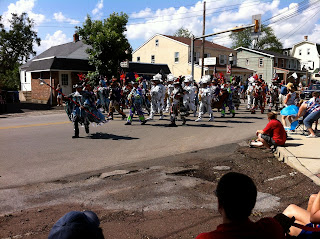 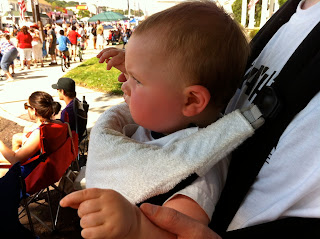 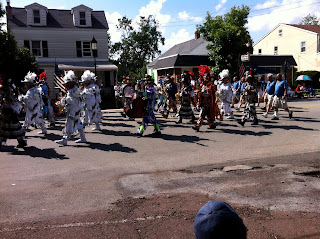 I was fond of the bagpipe brigade myself.  We stayed about thirty minutes all in all, before gladly slinking back to the cool of our living room.
Posted by Elizabeth at 9:00 AM

Email ThisBlogThis!Share to TwitterShare to FacebookShare to Pinterest
Labels: 4th of July, parades