Reasons To Be Cheerful by Nina Stibbe.  I love Nina Stibbe’s books.  She has a quirky, wonderful sense of humor and a great eye for character.  Like her first two, this novel stars the wonderful Lizzie, who is now done with school (and done with her job in the nursing home) and has now found a job working for a horrible English dentist.  Lizzie’s mother is still as loose a cannon as ever, but Lizzie is beginning to spread her wings and move away from her family.  Although the dental work scenes can be hard to read if you are dental work sensitive, Stibbe is just so funny and makes Lizzie even more so.  Lizzie’s desire for a sexual relationship with her somewhat boyfriend, who also might perhaps be her mother’s boyfriend, is so real and poignant.  I enjoyed this throughout.

Purple Hibiscus by Chimamanda Ngozi Adichie.  I got three of Adichie’s novels after reading an article about her in The New Yorker.  This one was her first and it was a good story.  She immediately draws the reader in and sets the scene well with a young girl, Kambili and her brother, Jaja, two wealthy kids in Nigeria with a controlling and abusive father.  That was actually my problem with the novel:  that an abusive father is kind of an “easy” plot twist.  It’s a cheap thrill in a way.  I do look forward to reading her second novel next.

The Birdwatcher by William Shaw.  I liked this mystery.  It was surprisingly subtle and good.  William South is a police officer in a coastal town in England.  He is an everyday policeman, but gets involved in the solving of a murder, because it was his friend and neighbor who was killed.  The book switches back and forth from the present day case, to the death of Billy’s father in the troubles in Northern Ireland when he was young.  He also befriends the lead detective on the case and her teenage daughter.  The strange landscape is a main character of the book and the whole thing was smart and well done.

Even If Your Heart Would Listen by Elise Schiller.  This is an account of the addiction and death of Schiller’s daughter, Giana Natali, from a heroin addiction.  Schiller’s study is mainly about how the existing rehab programs failed her daughter, relying as they do on the format for alcohol addiction.  Most of the many rehab programs Giana went to also emphasized moral failure (re the 12 steps), instead of treating opiate addiction in the ways that are proven to have the best chance:  via inhibitor drugs.  It was a sad and eye-opening read.  Schiller is honest about what she and Giana’s father failed to notice and do, and has gone on to advocate for better options for others.

Bluebird, Bluebird by Attica Locke.  I got the second book in this series and was about to read it, having heard the author and enjoyed her on NPR, when I realized that there was a first book.  So I got it but did not really enjoy it.  It is about Darren, a Texas Ranger, who is estranged from his wife who wants him to return to law school.  Darren has a love/hate relationship with his job and badge and can’t leave it yet.  He starts to work on a case involving two murders in the backwoods of Texas, that are probably aryan brotherhood related.  For me, the book got off to a very slow and sometimes confusing start.  Halfway through it began to pick up a little, but on the whole, I wasn’t hugely enamored with it. 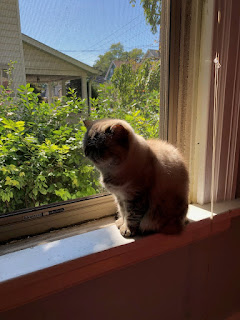 Posted by Elizabeth at 9:39 AM