My Story by Elizabeth Smart.  I have a lot of admiration for the work that Elizabeth Smart does today, so I finally got ahold of her first book and read it.  One has heard a lot of it already, of course, but it was fascinating to read her account of her horrible kidnapping and nine months of captivity.  Her ghostwriter is not the best — and I often thought it would be interesting to have her story paired with what her parents were doing to find her — but she is smart and sensible, and doesn’t shy away from delving into any and all aspects of the experience.  I often found her religion frustrating, too:  you get a lot of her feeling like god is looking out for her, while meanwhile she is being raped daily and near-starved.  With friends like that, who needs enemies, etc. etc.  But it is a powerful read and I do recommend it.

Sunburn by Laura Lippman.  I love Laura Lippman’s novels (even though I still have yet to read what she is most known for, her Tess Monaghan series), and was excited to read her latest.  And it didn’t disappoint, even though I found it a bit of a stressful read.  She’s a great writer, and this story is interesting right from the very beginning, but (although really I should say “and” since it is a thriller, and suspense is par for the course) the way it is set up, it is obvious something bad is going to happen, so I was all on edge throughout the whole book until it does.  The story begins with Polly, a woman on the run, who ends up in a small town in Delaware of all places.  She meets Adam in a bar, and both eventually end up working there.  Polly has several pasts which she is trying to hide, and she obviously has an agenda, but we also learn that Adam is a detective hired to keep an eye on her.  It’s a fun and sad and stressful book, superbly crafted by Lippman.

Homegoing by Yaa Gyasi.  I had heard many wonderful things about this novel, Gyasi’s first, and there are ways in which it was excellent.  It’s an epic story that begins in the 1700’s with two women in Ghana, Effia and Esi.  One stays in Ghana, and one becomes a slave sent to America.  The interesting thing about the book is that each generation gets one chapter each, and then the next chapter is the next generation, so you speed through the centuries pretty quickly.  Gyasi is a really good story-teller and I was always excited to begin learning about the next person.  It was also fascinating to see how the two branches of the family diverged.  My criticisms are two:  first, I think it is really hard to write and read stories of slavery.  I feel like it has almost all been done, and thus when you read about the torture of slaves and the escapes that end in torture, and the slave owner’s young child having total power over the slaves — well it has all been done before, and it also comes to seem a bit like torture porn.  My other criticism is that because of the way the novel was set up, it can seem like an overview at times, as she tries to capture the general African American experience (and I’m assuming the same is true for the Ghana half).  However, I do recommend it:  she has talent.

Everybody’s Fool by Richard Russo.  I enjoyed reading this novel in the same way I enjoyed reading Nobody’s Fool last month.  Russo is such a fun, relaxed writer, and both books reminded me of a modern day Trollope novel, in that they easily depicted a whole community in a very particular window of time.  This book is definitely a continuation of Nobody’s Fool, except the main characters are a little different.  We get a lot of Sully still, and some of Rub, but Russo surprised me in focusing on Douglas Raymer, the policeman in the first book who Sully sucker punches.  There’s tension with Ruth’s horrible criminal son-in-law, and I certainly missed the presence of Miss Beryl, who is still mentioned quite often.  It is, undoubtedly, a romp.

The Lying Game by Ruth Ware.  If you want a headache, then read this book.  Harrumph.  I do think Ware’s writing has improved with each thriller she writes:  In a Dark Dark Wood, her first, was okay, whereas The Woman in Cabin 10 was much better done.  For some reason with this one though, I just found the stress of it unpleasant.  It’s one of those situations where the characters do something stupid, and then how they handle that stupid things snowballs, and things get worse and worse, and if one character had just stepped back and confided in someone else, so much of what goes wrong could have been avoided.  This doesn’t make it a bad book; on the contrary, I think it could be argued that this is evidence of its success.  But it just made me very tense every time I read it, and it got so I was looking forward to being done with it, although there are things Ware does at the end of the book that I thought were good.  In a nutshell:  Isa, the main character, is a lawyer with a newborn, who gets a text from an old friend that she is needed.  Isa and two other women, Fatima and Thea, immediately travel to Salten, a beach town, where they all went to school for a year when they were 15.  Something happened that year, and how they covered it up is about to be exposed.  There are lies, and then lies upon lies upon lies. 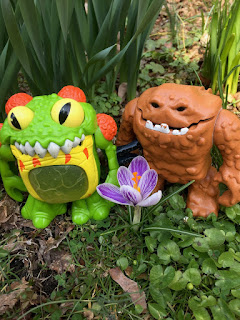 Posted by Elizabeth at 7:12 PM