Heroes of the Frontier by Dave Eggers.  This was an interesting novel and I really like Dave Eggers’s writing—he has such an unique turn of phrase, and he is always very wry and funny.  It’s not a happy novel, and I did spend an inordinate amount of time hoping for the narrator to find happiness – even if doing so would have made no sense to the story.  It’s about Josie, who is having a crisis of sorts.  She’s a dentist but she got sued by a patient who had cancer she thought Josie should have detected, so she ends up selling her practice, and taking her two young children on an adventure in a camper van in Alaska.  She is fleeing from suburbia, definitely, and the materialism that is so often attached to it.  She isn’t sure, however, what she is fleeing to.  The book then consists of the adventures that Josie and her children, Paul and Ana have.  Although they are nominally in Alaska, they really could be in any kind of semi-wilderness: the novel doesn’t strike me as being very specific to place.  And often one wants Josie to snap out of it and be a better parent to her clearly very worried son.  But on the whole I found it unusual and interesting and funny.  Josie’s quest is an important one, and although she is disorganized and klutzy in its execution, she is on track by dint of being on a trek.

The Elegance of the Hedgehog by Muriel Barbery.  This book was recommended to me by my niece and I enjoyed it.  It was made into a movie, too, and I can see how a movie would be good.  It reads as a comedy, mostly, although the topics are serious.  Madame Michel is the main character, but the chapters switch back and forth from her point of view, to a 12 year old girl, Paloma.  Madame Michel is the  concierge in an apartment building in Paris.  She is a self-taught intellectual, but pretends to be stupid so people will leave her alone.  One day a new tenant moves into the building, a wealthy Japanese man, and when he makes a reference to War &  Peace, Madame Michel mistakenly responds.  She tries to then cover up her intelligence, but Mr. Ozu is on to her, and sets about trying to catch her out.  Meanwhile, Paloma is a smart, quirky girl who has decided that on her next birthday she shall commit suicide and burn the place down, because people are phony and this phoniness is unbearable.  Soon Paloma and Mr. Ozu join forces and befriend Madame Michel.  It is all very funny and well-observed.

Plot 29: A Love Affair With Land by Allan Jenkins.  This is a very interesting, poignant, and well done memoir by Allan Jenkins who writes for The Guardian and is a foodie (I think he has a cookbook).  He has a garden plot in London and started to write about a year of his gardening life, and ended up writing about his childhood and the search for his biological parents.  His childhood is a mix of nice and very grim:  he spent most of the first five years in a home or in foster care, as his mother wouldn’t care for him.  He and his older brother, Christopher, are finally taken in by a childless couple in the countryside, but they end up never officially adopting the kids and then trying to get rid of both in their midteens.  He is reunited with various family members over the years and makes some very interesting discoveries as to who his parents were and what was going on with them.  This is all interspersed with his gardening on the plot and at a house in Denmark.  His memoir parts aren’t written linearly, necessarily, and sometimes I found his reluctance to explicitly state the details frustrating.  But it was an often fascinating book and a good mix of subject.

Priestdaddy: A Memoir by Patricia Lockwood.  This memoir made it to the New York Times 10 best books of 2017 list and it is really worth reading.  Lockwood is a poet and an infamous tweeter, and in her early thirties when she and her husband go to live with her parents after suffering a physical and financial setback.  Her parents are cheerily crazy – her father became a catholic priest after he was married, and went on to have five children while working full-time as a priest.  To say he is a “character” is to put it mildly.  Lockwood treats him kindly; more power to her.  The book is ostensibly about her father, but really about her childhood.  Both are interesting, but it is her writing that is the real draw.  She has an amazing and very funny way of putting things, and whereas most good books have a good paragraph here and there, with Lockwood it is really amazing sentence after amazing sentence.  Although it’s hard to not get annoyed at her while reading, it’s a phenomenal book.

Britt-Marie Was Here by Fredrik Backman.  I really enjoyed reading Backman's A Man Called Ove, but when I had glanced at this book, it looked too similar to Ove, so I passed on it for a while.   But then I kept hearing how enjoyable it was, so I read Britt-Marie:  and it IS similar to Ove in concept, in that you have a main character who is kind of on the spectrum and set in his/her ways, and the book is what happens when those odd, yet logical, ways meet contemporary norms.  It's a fun read though.  When the novel begins, Britt-Marie has left her husband, and gotten a job for the first time at age 63.  She's a woman with great cleaning ability, yet not a lot of social graces.  This job is really her first contact with the world outside of her flat since childhood.  Britt-Marie gets a job at a recreational center in Borg, a nowhere town on a highway.  It turns out that its down-and-out citizens are just what Britt-Marie needs and vice versa.  It's lighter than Ove and a bit more grasping at straws, but if you liked Ove, you will like this book.

Bon Appetempt: A Coming of Age Story by Amelia Morris.  This is a food-oriented memoir with recipes at the end of chapters, and was an entertaining and interesting read.  Morris grows up shuttling between her parents' in Pittsburgh and Saegertown, PA and is an intense kid.  She and her husband, a high school friend, go to live in LA and try to break into the industry.  While doing so, she starts learning how to cook, and eventually chronicling her efforts in her blog, Bon Appetempt.  I came across her blog about a year ago, which is what lead me to the book -- although she no longer updates it frequently.  When she does, however, it -- like this memoir -- is worth reading.  She's a funny writer with a good ear for the important takeaway. 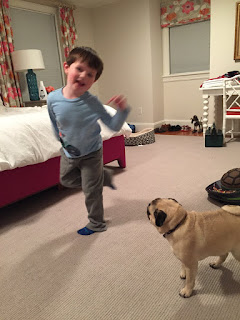 Posted by Elizabeth at 9:18 AM