To say that Owen is not very adventurous when it comes to food is putting it mildly.  At five years old, he still eats about seven things.  (How crazy does this drive me?  Very, very crazy.)  But one thing he does love is fruit.  And he is willing to give any fruit a try, because doing so has generally had the positive result of adding something else to his like list.  A month or so ago I was in the grocery store and near that odd section between the fruits and vegetables that has fruits that aren’t common in this country.  Owen and I stopped to peruse and we decided to get a dragon fruit.  We brought it home, looked up “how to cut dragon fruit” on YouTube, and then Owen proceeded to snarf down the whole dragon fruit with moans of ecstasy.

Feeling emboldened, we then went on in successive weeks to try:  star fruit (delicious! Although we added a tiny sprinkling of sugar, like we do to our blackberries); passion fruit (I liked it!  Owen thought it looked too much like a sneeze, but he did try two substantial bites); dragon fruit with white insides instead of magenta (good!); pepino melon (on YouTube they said this would taste like a cross between a cucumber and a honeydew; it did; bleck); pomegranate (not only did he love it but he wanted to bring the seeds in a baggie for a snack on our walk); and horned melon (very odd looking on the inside – basically all wet green seeds – but it did taste exactly like the YouTube video promised, like a banana and a kiwi; Owen ate it with a spoon and relatively with gusto).

Next up is a mango, which Owen actually had a lot of as a toddler but doesn’t remember.  We’ve told him often that he is like my father, who is also a fruit lover, and one day Owen had me text Pa to ask him if there was any fruit he did NOT like.  It turns out Pa is not a big fan of mangoes, which he found to be too sweet and too sticky.  So Owen already plans to try this mango with a fork, so as not to get any of the sticky on his hands.  He still has an open mind about it though, and is very impatiently waiting for the mango to ripen.

Of course I am hoping that his trying fruit will transfer over to trying other foods.  It hasn’t yet, but a girl can hope.  In the meantime, I am keeping my eye out for an ugli fruit; apparently right now is not the season.

Owen looking melancholy with a bowl of horned melon.
See what I did there? 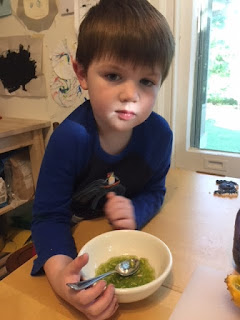 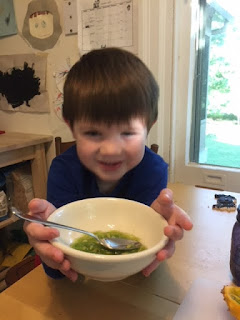 Posted by Elizabeth at 7:56 PM