We have been suffering a series of small calamities these days, including one regarding Miss Dorothy.  On the Monday before Thanksgiving, I was awakened by Dorothy in bed next to me having what appeared to be a grande mal seizure.  It was horrible.  There were cries of pain, gallons of frothing from the mouth, and releasing of her bladder and bowels.  I truly thought she was dying and when she seemed to be quieting down a bit, I ran to get Sean so he could say goodbye to her before she died.

By that time she was coming out of her seizure, although she didn’t really seem to recognize Sean.  However, twenty minutes later she was back to normal and trotted down the stairs for some water and to go outside.  We had a vet appointment already set up for her for another issue for that coming Friday, so we brought her then and they did bloodwork and everything was fine.  They could only conclude then that she probably had epilepsy, since her age at almost 5 was right for a first episode, and apparently bulldogs in general are inclined to get it. 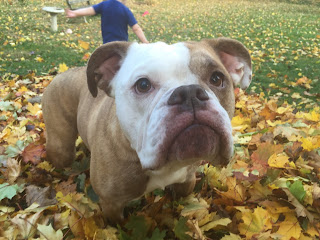 What we all were hoping though was that it would be a one-time thing, but two weeks later, this past Tuesday night, she had seizures at 7:00 pm, 12:30 am, 3:30 pm, and 8:30 am.  We brought her again to the vet, since it seemed the seizures were “clustering,” which apparently is Bad, and they monitored her for a day and gave her some valium for pain.

Now Dorothy, like humans with epilepsy, is on phenobarbital, which she will take twice a day for the rest of her life.  And hopefully the meds will work to keep most of the seizures at bay.  The vet said she will seem a little drunk for awhile until the meds work their way fully into her system.  And she does seem not quite herself yet.  She’s been getting some good sleep, finally, and she’ll get out some balls and bring them over to us, but there are strange things too – like she won’t go upstairs in general, or go upstairs for water in particular, which is something she used to do multiple times per day.  She also keeps seeming to hear things that we can’t hear.

Apparently the only side-effects of the meds are an increase in thirst and an increase in appetite.  This seems good to me, in a way, since Dorothy has always been our Skinny Santa, and we are always trying to fatten her up.

It’s always something with our beloved rice-paper pup! 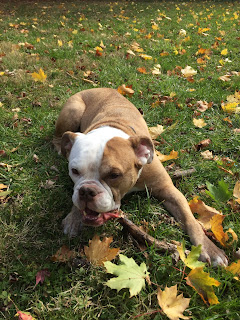 Posted by Elizabeth at 8:09 PM