We spent the last two weeks of August visiting my parents in Maine, and enjoyed every minute of it (except maybe for an hour or two of tantrum Owen had in the car on the way back).  Maine is beautiful, and both Sean and I would love to figure out a way we could live there permanently (so far we have come up with winning the lottery…but it hasn’t come to fruition yet.  I’ll keep you posted!) 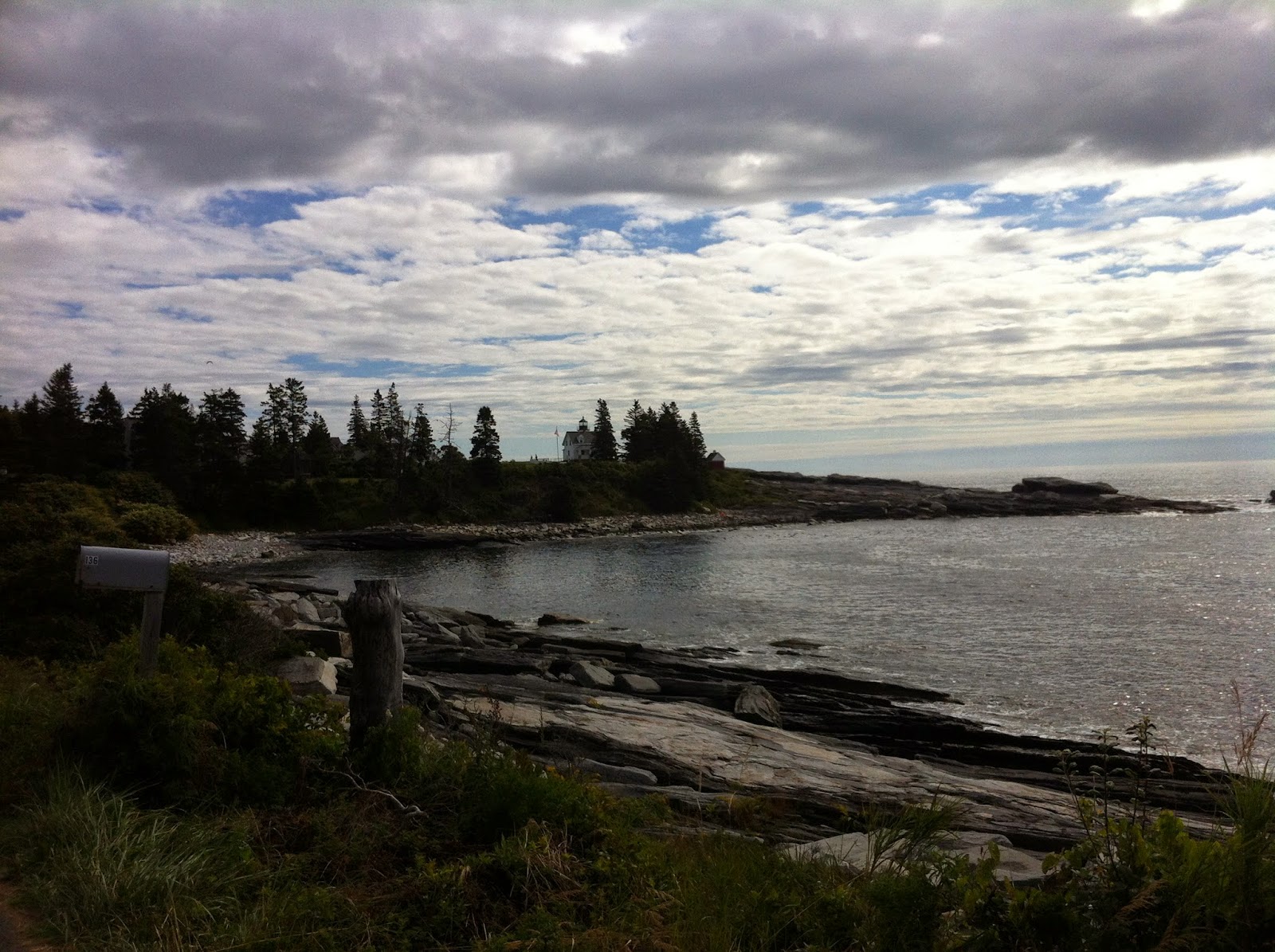 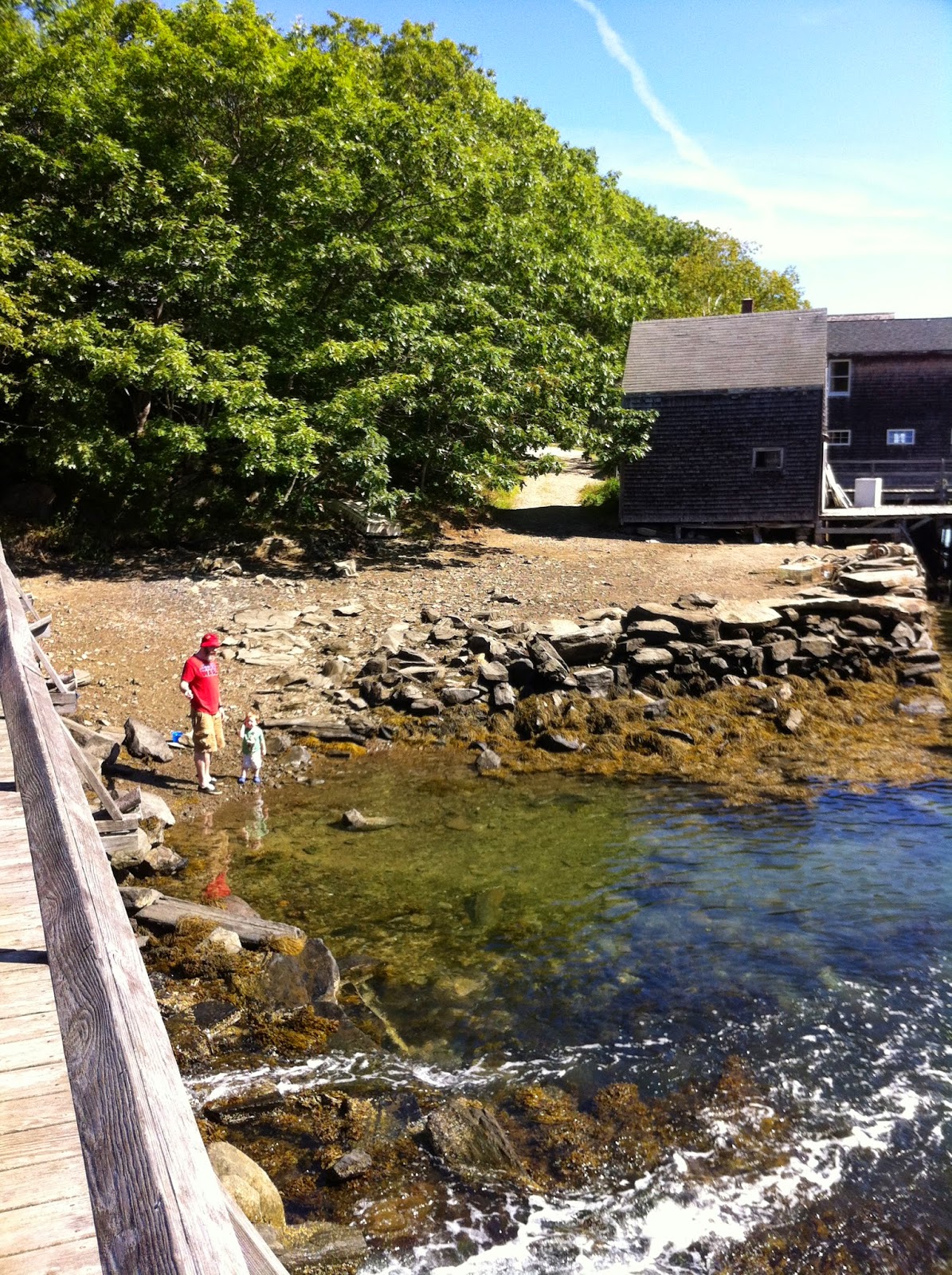 It was sunny every day we were there, and warm enough so that we went to the beach about ten days in a row.  Owen, ever the cautious child, was not sure what to make of the ocean at first.  On our first visit, he gripped on to the sand with all ten toes and stayed in place as the tide came in around him, so that eventually he was in up to his waist, even though he had not moved his feet a centimeter.  During that time, however, he had a great time splashing himself with his shovel and chortling an enthusiastic and repeated wo-ho!, which amused other beach-goers.

Not the beach.  I didn't bring my phone to the beach because of how one of us tended to throw sand everywhere.  But this is an inlet where we went a few times so that Owen could wade and throw a few rocks: 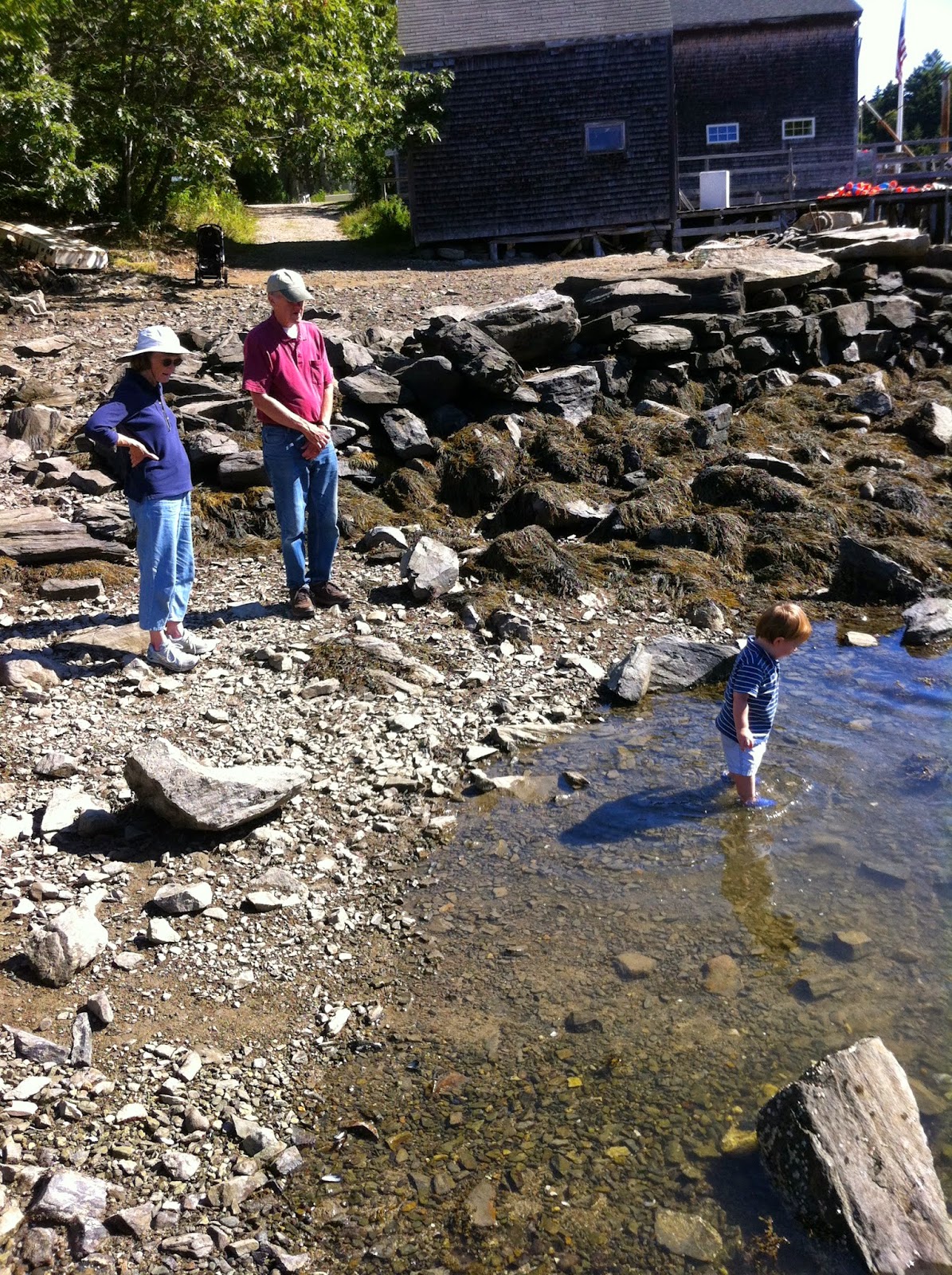 He loved running back and forth from our beach chairs to the water, and loved even more throwing stones into the water – an activity he also did at rivers and bays and inlets (his arm improved, too, from practically hitting himself in the foot with the stone to getting it a few feet away from where he was standing).  I also got him to happily come in the water with me and “swim” on his stomach while kicking his feet.  Finally, he was allowed – nay encouraged – to kick!  Mind blown.  And of course he liked making sandcastles and digging watery holes, and following seagulls, etc. 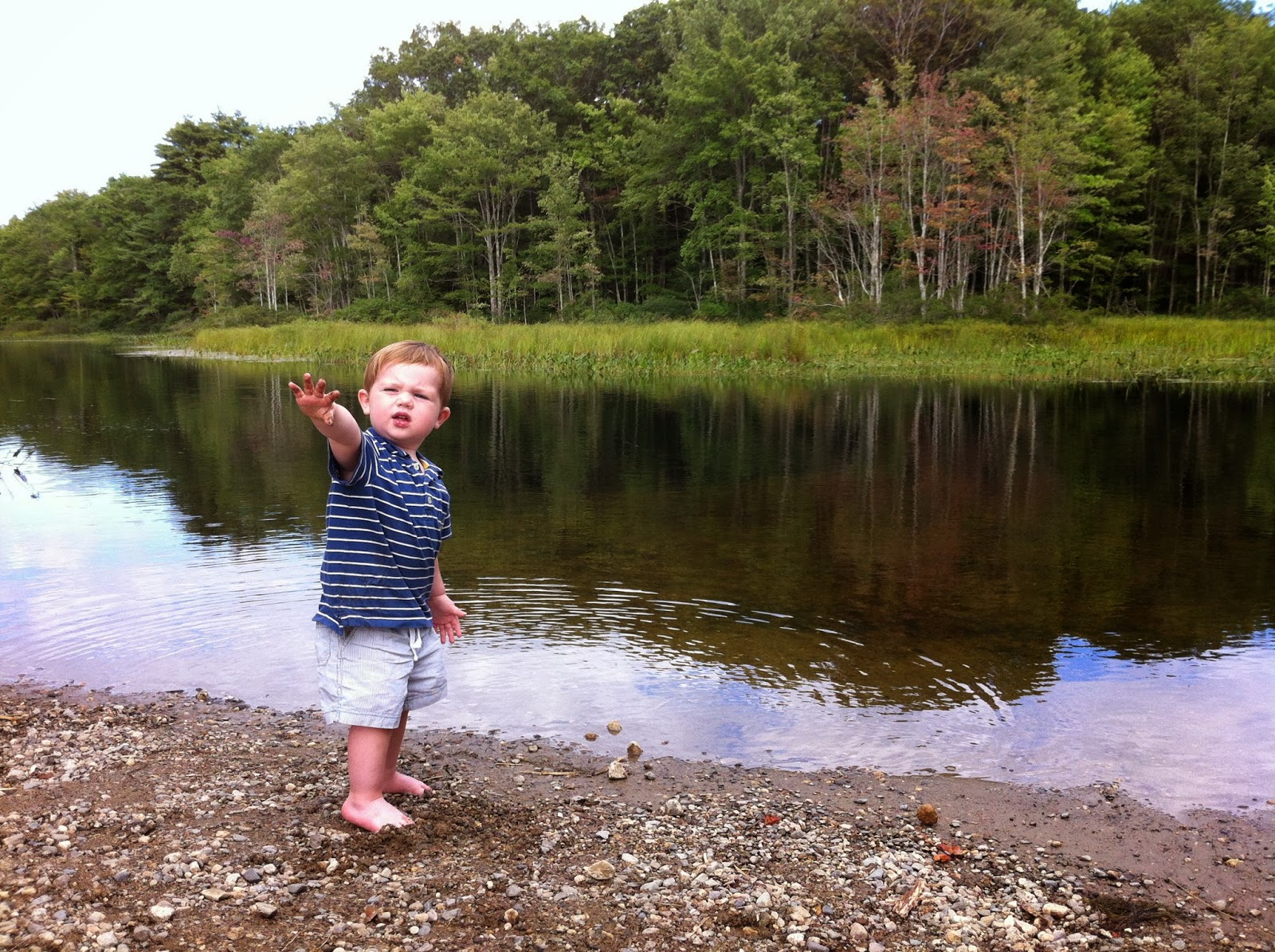 Pemaquid River.  Sure it looks pretty, and it was all fun and games
until we got attacked by a leech! 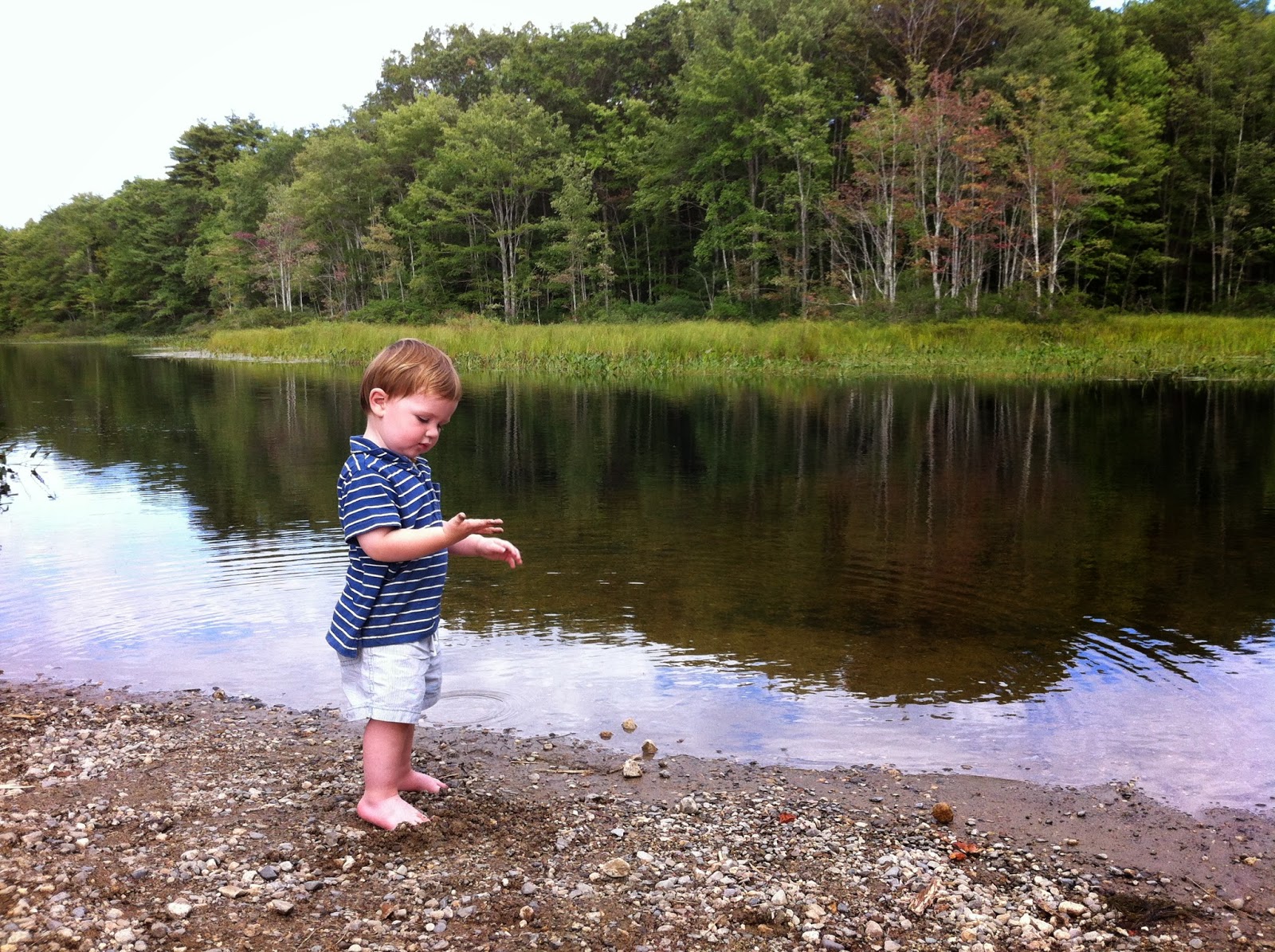 Lest you think that Owen’s vacation was all fun and games, however, here he is being put to work by his Granny and Grandfather (whose names he shortened to Ghee and Pa).  Vacuuming with Granny!: 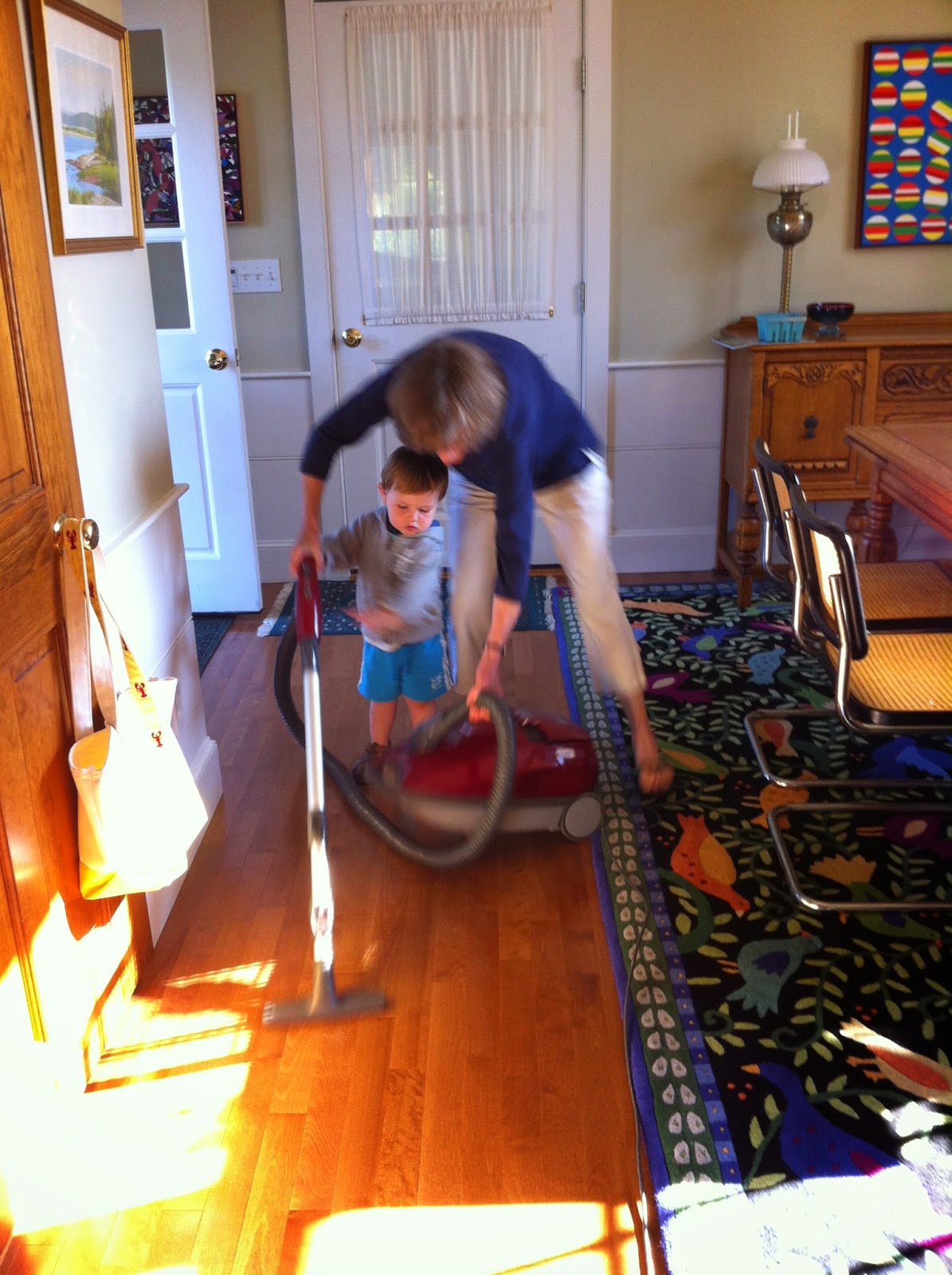 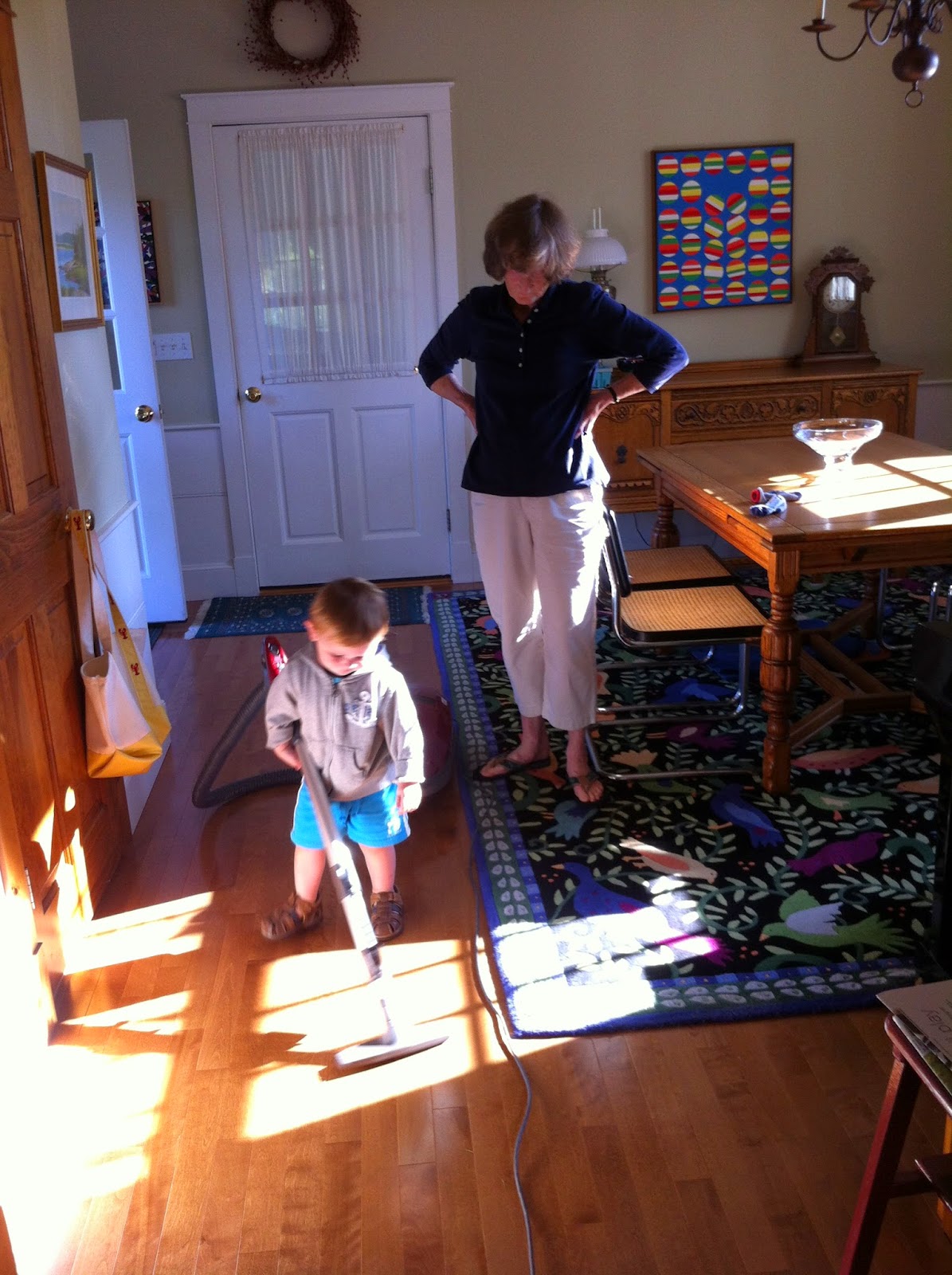 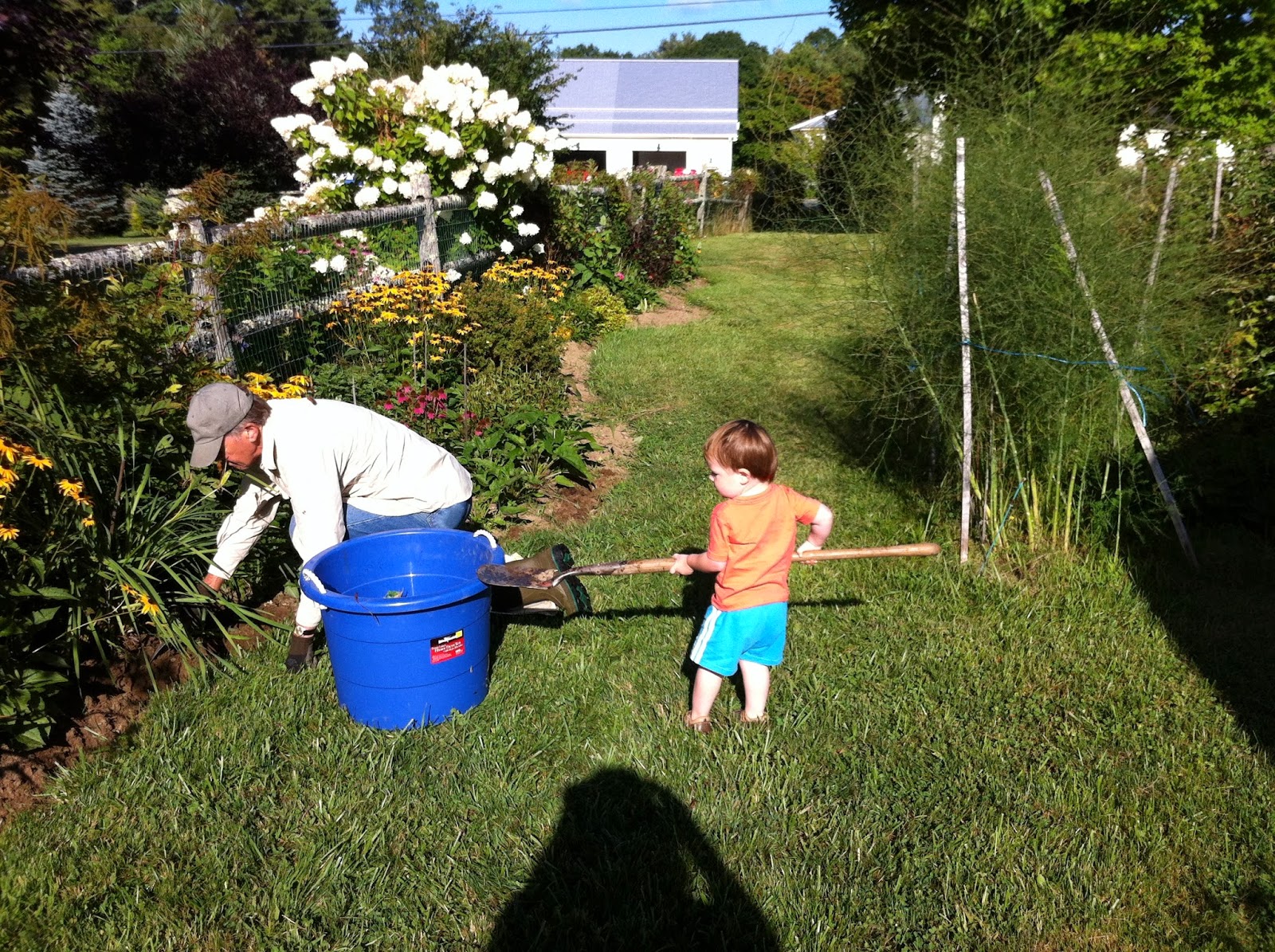 Wanting to help Grandfather on his tractor wearing, as he put it “Pa’s hat”: 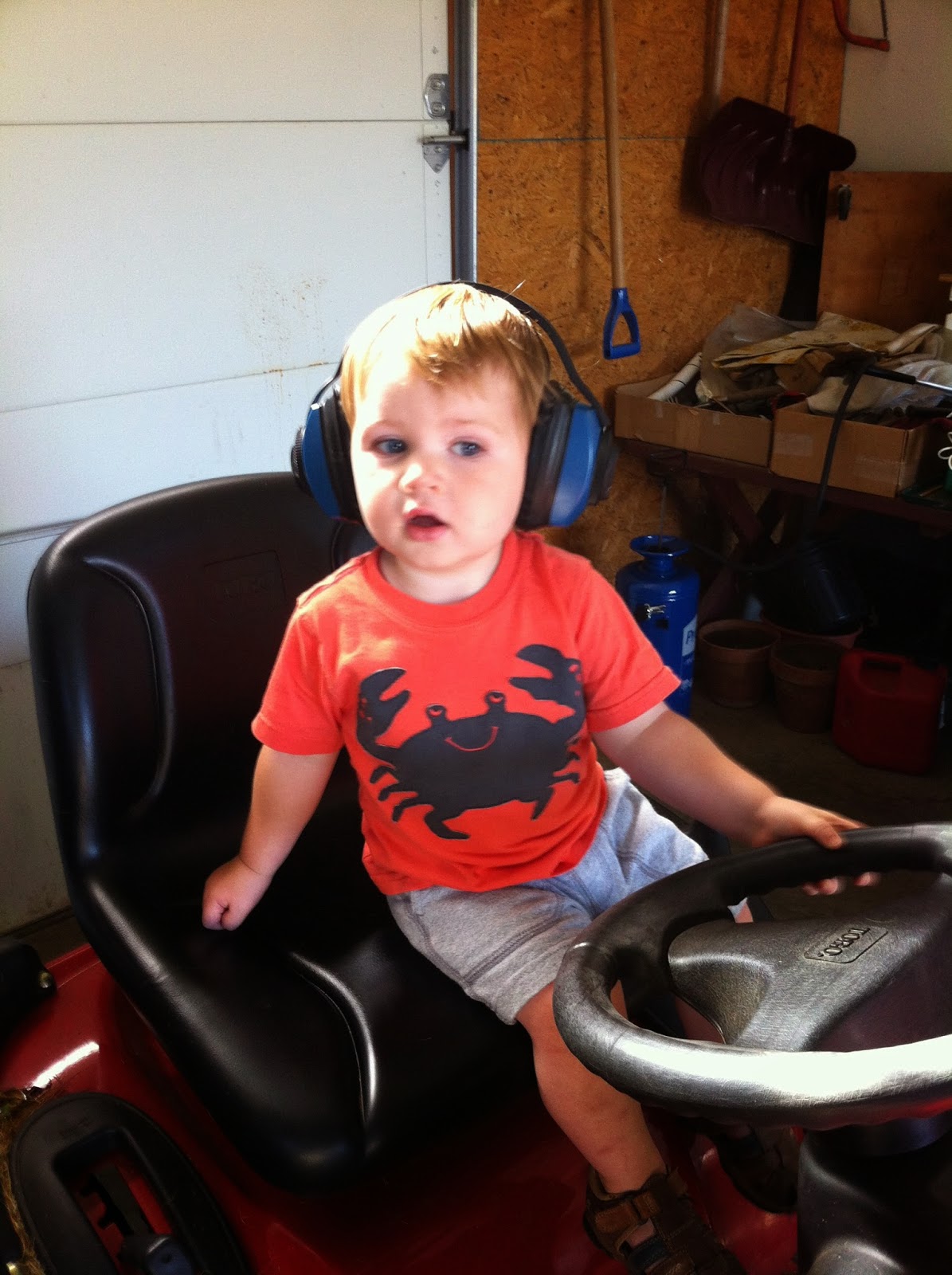 Sean taught Owen the fun to be had in rolling on the grass, and although I would never partake myself, I did stand by nightly while he did his post-dinner rolling, and was able to get a few pictures: 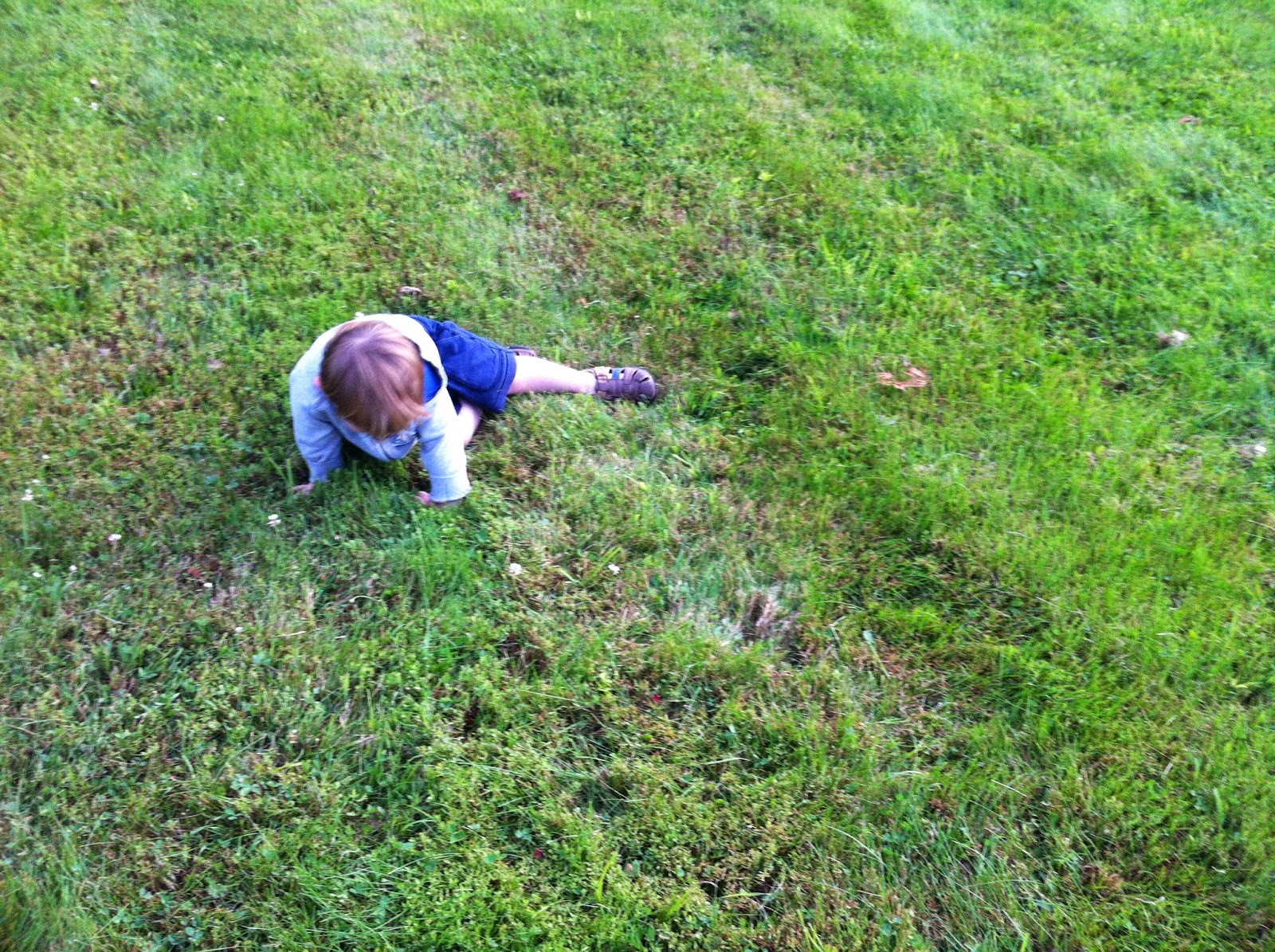 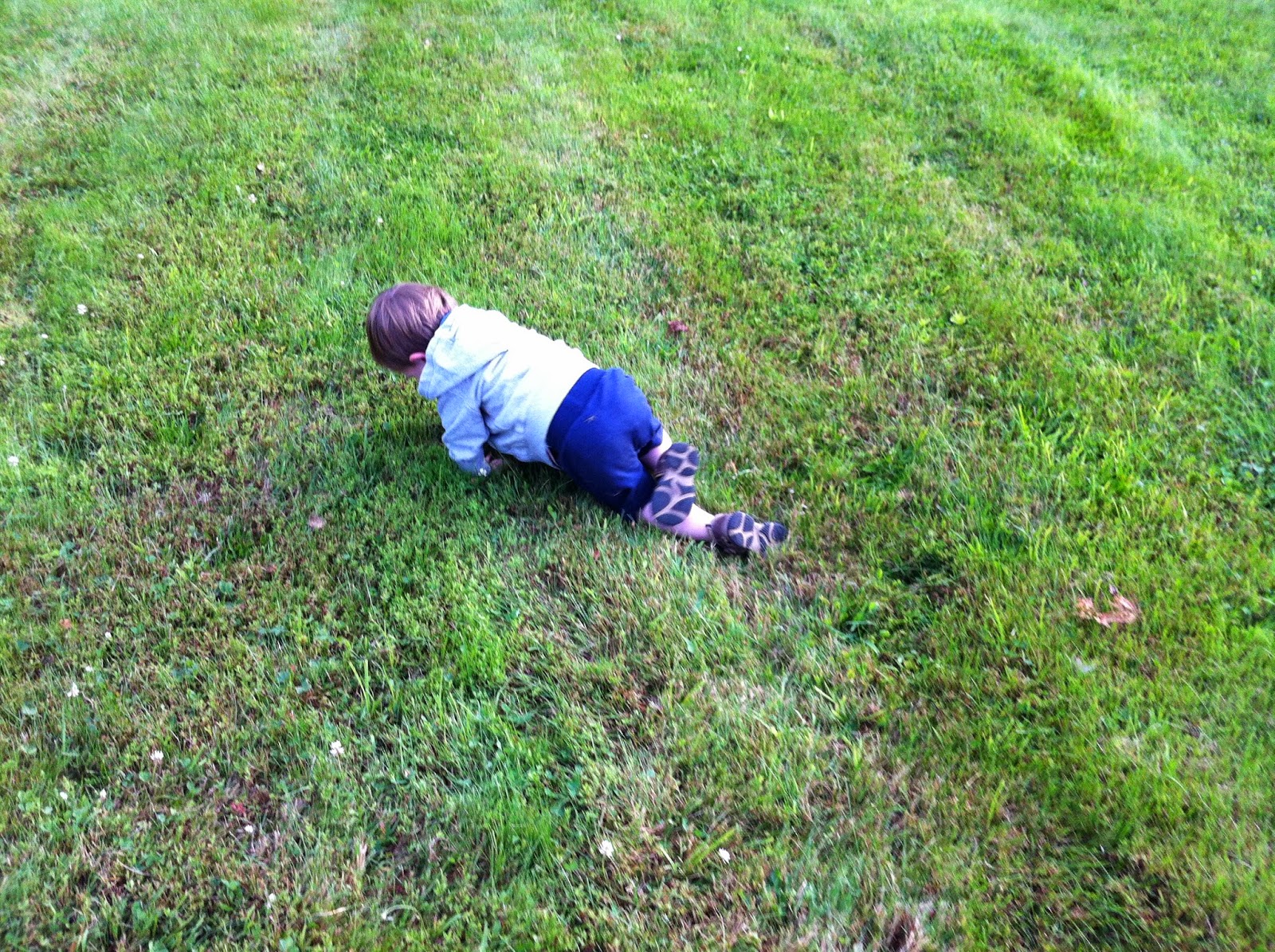 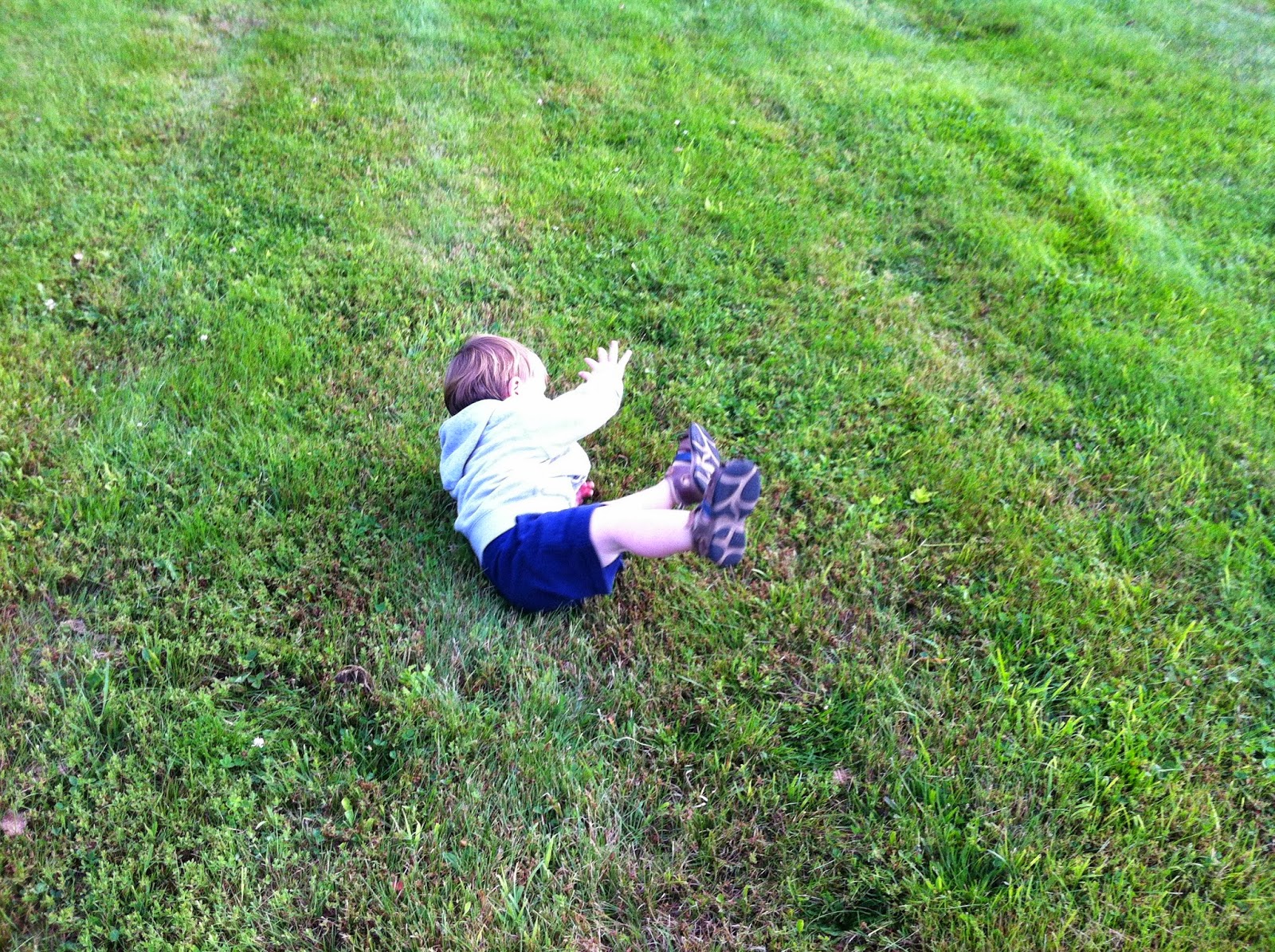 Posted by Elizabeth at 8:24 PM

Great photos! How is dear Dorothy?

Dorothy is doing much better--thanks for asking! She's putting weight on both hind legs equally, for the most part. I just don't have a lot of confidence that we will be able to keep the injuries from reoccurring.

I hear you have a new Quincy?! Elisabeth needs to post pictures of the fine fellow on her blog!

Yes, I do have a new dog, and he is a really good one! He has a super personality, is pretty mellow, mostly gets along with the cats, although he is more interested in them than they would like.
So glad to hear that Dorothy has improved.
LOVED the story of Owen and Grandpa's dropped fork!